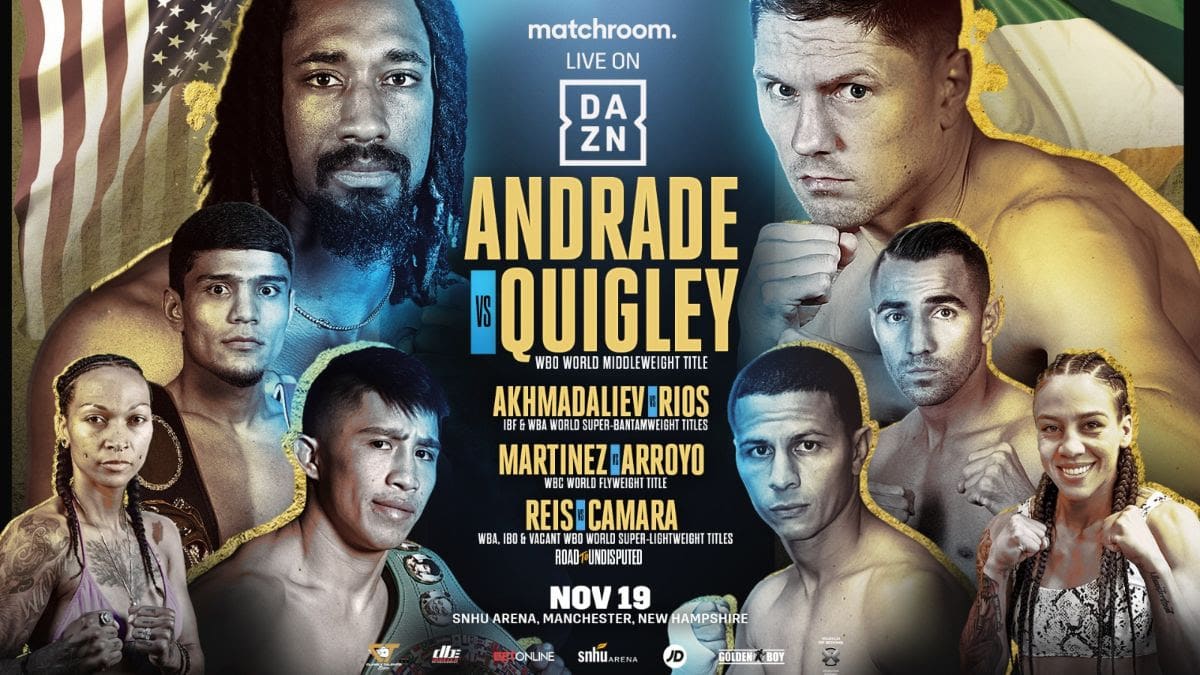 It’s been 23 months since my last media assignment but it’s great to be back.  Matchroom Boxing decided to make its annual trip back to the Northeast.  The destination – SNHU Arena in Manchester, NH.  The main event – WBO Middleweight Champion Demetrius “Boo Boo” Andrade makes his 5th defense against contender Jason Quigley.  Promoter Eddie Hearn would also load the card up with 3 other world title fights.  A rare world title quadruple header in New Hampshire.  Apparently, there hasn’t been a world title fight in this state since 1904!!!  Something long overdue indeed!!!  How could I not go?  I live 45 mins from the venue in nearby Massachusetts.  It was a no brainer.  The first fight was highly touted prospect Khalil Mack taking on Aaron Casper.  Watching this fight Coe looked listless against Casper who put on a spirited effort.  The effort was enough for him to get a majority draw.  The lone non-draw score, 39-37, went to Coe.  Thomas O’Toole would score a brutal 1st round knockout over Mark Malone.  Nelson “Chino” Perez vs Raymundo Rios was largely one sided.  Knockdowns in the 1st and 2nd rounds each by “Chino” on Perez.  Surprisingly this would go the distance with Perez winning a unanimous decision with identical scores of 40-34.  The last fight of the YouTube portion would see Demsey McKean take on Don Haynesworth.  After a couple of uneventful rounds, McKean came to life and started to apply pressure on Haynesworth.  By the 5th round, it looked like the fight would be on the verge of stoppage.  How Haynesworth stayed on his feet taking the beating he was taking was beyond me.  A final barrage in round 6 from Demean forced the ref to stop the fight with Haynesworth laying helplessly on the ropes.

The opening bout of the main card is a women’s fight between WBA super lightweight champion Kali Reis versus Jessica Camara.  The fight is also sanctioned for the vacant WBO belt as well.  Reis’s entrance was unique.  It got a segment of the crowd hype.  The fight was plenty of ebb and flow with a fair amount of blood.  Camara has no career KO’s.  Can’t figure out how this is the case.  She was rocking Reis pretty good especially with the left hook.  She came to fight.  Reis was no slouch with her punches giving it as good as she gets.  The amount of bombs these 2 are throwing and landing is incredible.   The final round was one for the ages as Reis was hitting her with right hands that had Camara on the verge of going down.  Scores: Dave DeJonge 95-94 Camara, Tom Schreck 97-93 Reis, and Martha Tremblay 97-93 for Reis.  A split decision win for Reis who wins 2 belts and earned a date with Chantelle Cameron next.  However, for being the local favorite, the crowd was booing Reis.  The crowd clearly felt Camara won.

Second bout featured unified WBA/IBF Super bantamweight champion MJ Akhmadaliev vs late substitute opponent Jose Velasquez.  Akmadaliev really came into the ring to Michael Jackson Black or White.  Very disarming I have to say lol.  At first it looked like a first round exit was coming for Velasquez as he just caught punches without throwing.  I guess he needed to feel some punches to get warmed up.  One thing is for sure Akhmadaliev is very heavy handed.  Showing excellent lateral movement and combination punching.  Velasquez has really made no adjustments outside of fighting harder.  As the fight went on the defense of Akhmadaliev began to get leaky and Velasquez started tagging him more frequently.  Too cleanly for my liking.  Akhmadaliev had also been getting dirtier.  From holding Velasquez down to butting him down to the canvas with his shoulder.  Add in the low blows which lead to repeated warnings from the ref.  Velasquez was still not being dissuaded.  It was good ebb and flow to end the fight.  Velasquez with the flipping and pushups afterwards to the enjoyment of the crowd.  All 3 judges would turn in scores of 119-109 in favor of the champion Akmadaliev.

Co main of the evening WBC flyweight champion Julio Cesar Martinez vs McWilliams Arroyo.  Man, they did not waste any time in the opening round.  They both traded knockdowns to start it off.   A definite round of the year candidate.  2nd round a still shaky Arroyo is running into the impressive offensive arsenal from Martinez and got dropped.  An intentional headbutt would bring an unfortunate end to a fight that was warming up.  The ringside physician called off the fight.  Since it didn’t go 4 rounds, the fight was officially declared a no decision.  The main event though had a lot of energy.  Cape Verdean and Irish flags waving all around.  The Irish contingent were going crazy for Quigley making his entrance to the ring.  After some tentative moments, Andrade scores a KD in round 1.  Quigley was looking badly shook up.  Round 2 was no better for him.  2 more vicious knockdowns and the referee waved it off, leaving Andrade with a successful 5th title defense.  Afterwards, he got on the mic and reiterated that he was ready for any challenge from anybody especially Jermall Charlo.  Quigley had to go to the hospital afterwards due to a broken jaw.   It was great to be back at a live fight again.  I missed it so much during the pandemic.  Thumbs up to Eddie Hearn and Matchroom Boxing for an entertaining night of boxing. 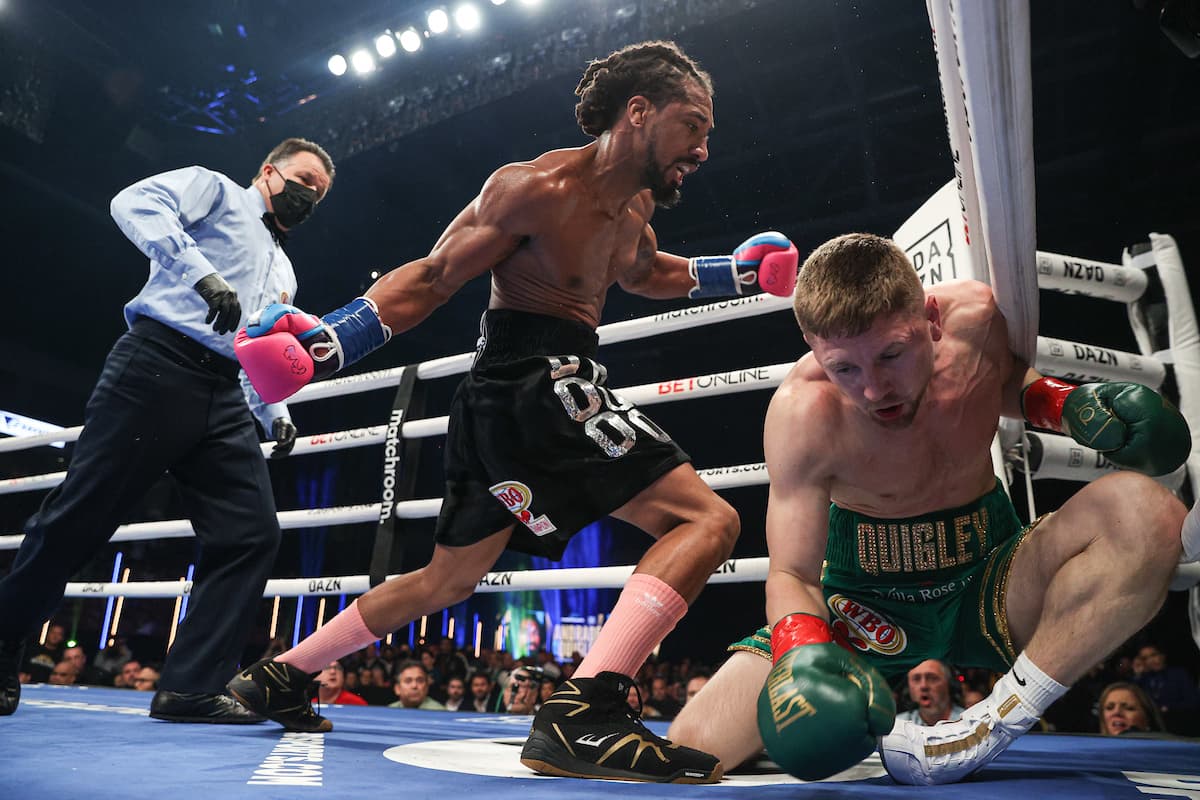 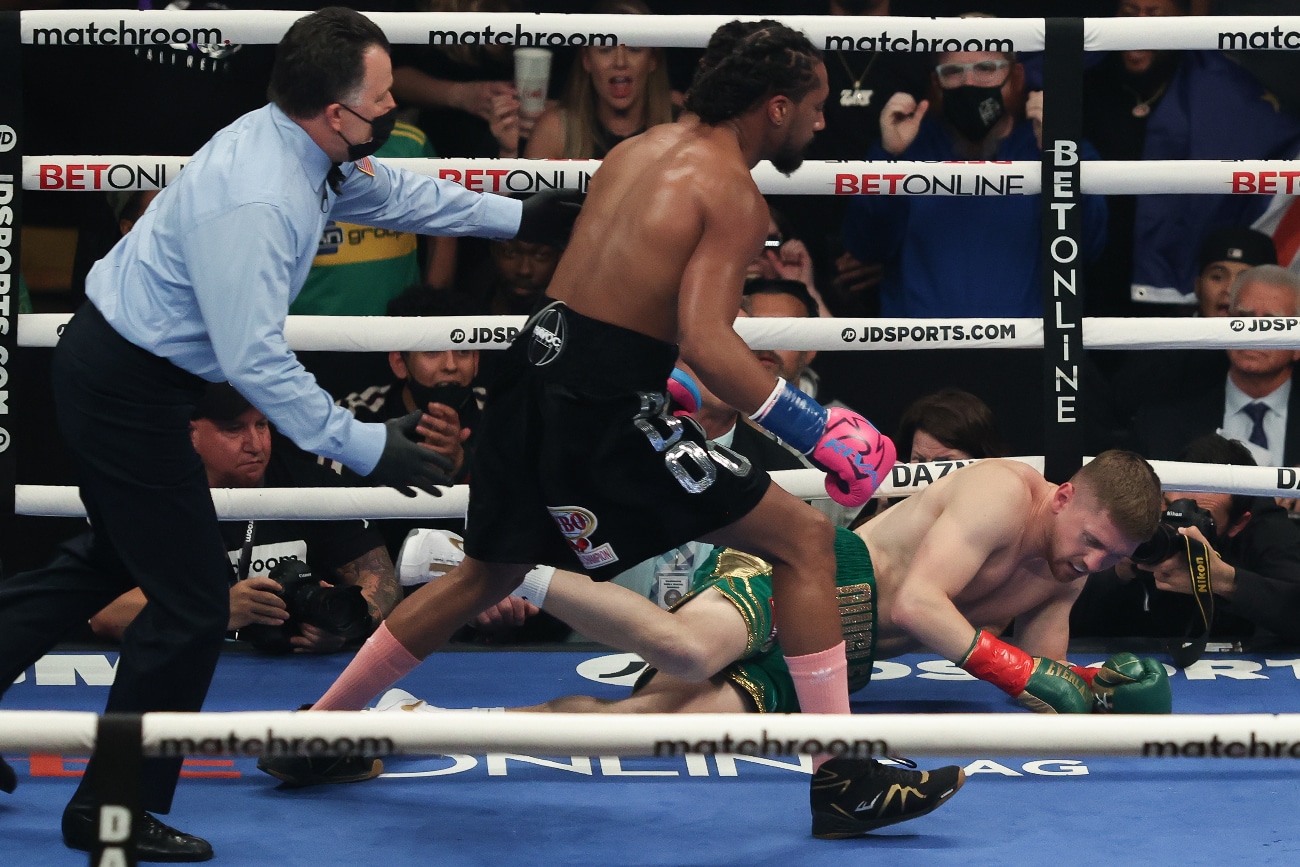