Last weekend was a treat to be able to spend some time in one of my favorite cities in the world, Philadelphia, to catch the unification bout between Oleksandr Gvozdyk and Artur Beterbiev.  Not only were their respective WBC and IBF light heavyweight titles on the line, but the lineal one as well.   The trip started late Thursday night.  I had a loaner at the time as my new car was being prepped for me to pick up next week.  So I didn’t drive myself down.  Instead I took a bus from Boston, a Megabus to be specific.  I learned some lessons.  Number 1 – Don’t assume you are the only one that takes late night trips.  Number 2 – If you don’t get a numbered, assigned seat on a Megabus, you are rolling the dice on your comfort.  Number 3 – A Megabus will sometimes make multiple stops before your destination.    Number 4 – Do not do third party reservations for a Megabus.  The Megabus I took was packed at 11:45 pm.  The non-numbered assigned seats were a little tighter than I expected.  I’m a 6’3 ½” 240 pound man having to be scrunched up next to someone for 7 hours.  My knees were screaming at me the whole way.  Outside of that it was a smooth trip.  Got there and took an Uber to my cousin’s house, who lived 10 minutes from the where it was being held, Liacouras Center.  North Philadelphia is an interesting place.  Not the nicest part to walk around without being on alert, but the cheesesteaks were on point.  Anyways crashed at my cousin’s place after eating and caught up on sleep throughout the afternoon. I woke up at 2 pm and by 4 pm was out the door on my way.

I arrived at the Liacouras Center after making a stop at a nearby craft beer for some short rib nachos and an interesting almost 17 % ABV beer.  Picked up my credential at the media entrance and made my way to the floor to where the media section was located.  I got there just in time to see the first fight of the whole card.  One thing that I like about the Top Rank undercards, if you get a lot of action to “whet your appetite” before the main fights.  Michael Seals didn’t waste any time in dispatching overmatch Elio Trosch in only 1 round.  Josue Vargas is in a tough scrap with Johnny Rodriguez and won this on all 3 cards 80-72.  The scores did not mirror how tough this fight really was.  Jeremy Adorno showing his class against Misael Reyes winning a 38-37 and 40-35 x 2 decision.  Julian Rodriguez vs Leonardo Doronio is not the most exciting affair outside of a few rounds, but still ended in the 6th and final round won by Rodriguez.  Joseph Adorno ended up brutally dropping Damian Sosa in round 2 into the second ropes.  The ref waived it off immediately.  Sonny Conto was the overwhelming dispatching Steven Lyons in anticlimactic fashion after Lyons stayed on his stool for Round 2.

Finally it was time for the televised portion of the card.  The co-main featured former WBA Welterweight Champion Luis Collazo against up and coming prospect Kudratillo Abdukakhorov. Very interesting name to pronounce never mind type and spell out. 2 things that I noticed off the bat.  Collazo has a very noticeable size advantage and was walking down the younger challenger.  This is the Collazo I remember watching all those years ago.  Abdukakhorov was landing a lot of clean punches but it didn’t seem like it had any real effect on Collazo.  The ebb and flow slightly changed when around round 6, Collazo ending up hurting his hand.  He wasn’t throwing as much but continued to still walk Abdukakhorov down.  Going into the 10th and final round, I felt the fight was close.  Unfortunately it would not come to a satisfying conclusion.  A headbutt opened up a nasty cut on Collazo and had him very unsteady of his legs.  So they went to the scorecards for a technical decision.  Kudratillo Abdukakhorov is declared the winner by the scores 99-91, 97-93, and 98-93.  I honestly did not see any of these scores in this fight at all.  The crowd also did not agree with it either.  I thought Collazo did enough to win a decision here.  Nevertheless Kudratillo Abdukakhorov is now the newest mandatory for Errol Spence.  I honestly don’t think he is ready for Spence, that fight may be ugly to watch.

Finally, the main event that we have all been waiting for: Artur Beterbiev vs. Oleksandr Gvozdyk. There was a heavy Ukrainian contingent at Liacouras Center.  They weren’t really obnoxious, outside of the playing of the 3 national anthems, but they were LOUD!!!!  Beterbiev was the de facto villain of the fight.  The boos for him were pretty loud as he walked to the ring stoically.  In contrast, I thought my ear drums were going to pop when Gvozdyk came out.  It seemed like the whole arena was behind him.  There was good solid action to start off the fight.  A surprising knockdown by Beterbiev to start off although it was late rescinded by the commission via instant replay.  The Ukrainian contingent are extremely riled up by this point.  Competitive first half where Gvozdyk seemed more jittery than usual.  Beterbiev’s power clearly making a difference on whatever plan the WBC champion had in store.  Gvozdyk landed enough jabs and right hands on Beterbiev to visibly mark up his face but was neglected to go the body.  Beterbiev was more than willing to walk through fire to land his.  By the 8th round, the tide seemed to be turning for good as Gvozdyk seemed to be breaking down from the pressure that Beterbiev brought on him.  9th round you can sense the end was near as a couple of hard rights had Gvozdyk backing in trouble and hanging on.  Teddy Atlas was going crazy in the corner as usual screaming at Gvozdyk to try to rally him Filled with confidence entering round 10, Beterbiev closed the show scoring 3 knockdowns to force the ref to stop the fight.  With this win, Beterbiev not only unified 2 light heavyweight belts but also picked up the lineal distinction.  A career best victory for a fighter who had been battling promoter issues for the majority of his prime and a new fight of the year candidate for 2019.

Fight Report brought to you by Patscorpio 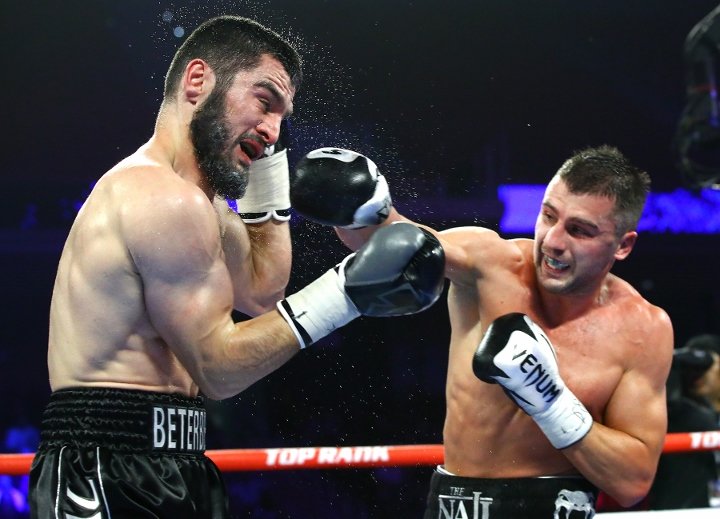 Patscorpio films Timothy Bradley talking about the Beterbiev vs Gvozdyk fight along with coming out of retirement and being on the HOF ballot. Beterbiev and Arum make cameos.

Beterbiev/Gvozdyk-Post Fight, Patscorpio was able to catch up with Max Kellerman and hear his thoughts on a few questions.

Fans were treated to a pretty good fight. We’re looking forward to Beterbiev’s and Gvozdyk’s next moves.

Both boxers make weight for their light-heavyweight unification fight for Friday night on ESPN.