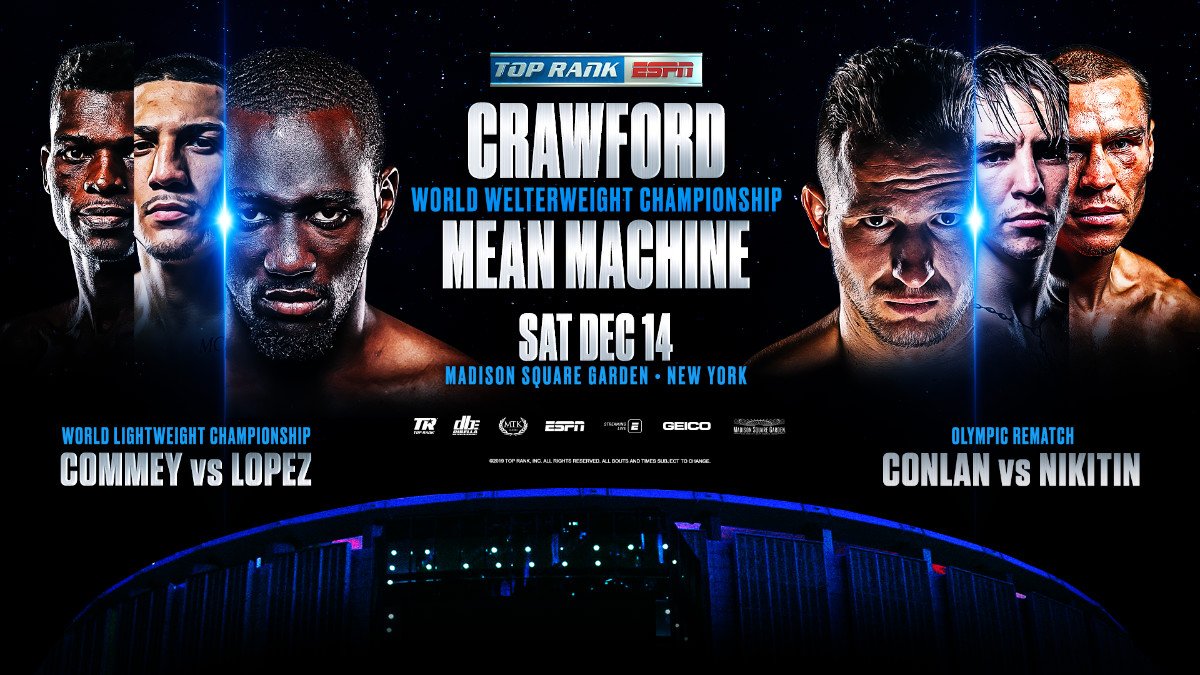 Madison Square Garden – one of the true meccas of boxing.  Now I’ve been to MSG to see various sports events since 2001, but the fact I would be covering a fight there for the first time was kind of surreal to me.  It would also be the latest stage for WBO Welterweight Champion of the World Terence “Bud” Crawford making a title defense against Egidijus “Mean Machine” Kavaliauskas.  In the lead up to this fight, it was taking a hit by critics alike.  The biggest criticism it seems came from the choice of opponent. “Mean Machine” is a very competent boxer on top of being undefeated.  However in his last fight out, he would fight to a majority draw against noted 147 spoiler Ray Robinson.  This was enough to raise some eyebrows.  The other big criticism was the fact on the undercard there was a fight that was getting major attention:  Teofimo Lopez vs Richard Commey for the IBF Lightweight title.  Most people thought that should have been the main event or on its own separate card.  To sum, negativity was the unfortunate theme of this promotion.  The ESPN+ portion of the undercard was fairly entertaining.  I was, in particular, surprised to see Mickey Bey facing and losing to George Kambosos.   That was very random to me.

The main (regular ESPN) portion of the card would start off with rematch from the 2016 Olympics.  Michael Conlan(12-0 7 KO’s) vs Vladimir Nikitin (3-0 0 KO’s).  In their Olympic meeting, Nikitin would win a controversial decision over Conlan.  Conlan would have a now infamous meltdown as this would be the catalyst for leaving the amateur ranks.  Now I was kind of neutral about this fight happening since Nikitin only had 3 pro fights.  But I think I understand why they made it.  The fact that Top Rank had one of its most lauded signings, Robeisy Ramirez, get upset in his first fight might be the reason they decided to strike when the iron is hot.  The fight itself wasn’t really exciting in the first half of the fight outside of the slip in round 3 by Nikitin.  The second half of the fight heated up with Nikitin putting pressure on Conlan trying to land the overhand right to supplement the body.  Conlan was absolutely lacing with Nikitin with power shots from outside, but Nikitin did not go anywhere.   In the 8th round, Conlan did briefly manage to have Nikitin in trouble but weathered the storm.  They slugged it out all the way to the final bell.   Personally I had the fight 96-94 in favor of Conlan.  The actual scores (100-90, 99-91, 98-92) I thought were very wide and did not reflect the fight.  The 100-90 score in my opinion showed wildly incompetent judging.  I wouldn’t mind seeing a rematch in the future if the stakes are higher and both fighters build up their profiles even more.

The co-main event was the fight everybody was anticipating the most.  Teofimo Lopez (14-0 11 KO’s) going for his first title shot against IBF Lightweight champion Richard Commey (29-2 26 KO’s). On paper, this had all the makings of a fight of the year candidate.  Explosive punchers who could land and end a fight at any given time.  The energy in the arena was buzzing loudly by this point.  I think everyone was anticipating this fight going some rounds.  Unfortunately the fight would terminate suddenly in round 2.  After a feeling out type opening round where Commey landed the more effective shots, he was dropped by a hard right cross counter by Lopez.  Commey was all over the place trying to regain his bearings.  Lopez, seeing how badly hurt Commey was, jumped on him and rained down blows upon blows. The ref definitely gave Commey all the chances in the world.  Instead of getting on his bike and/or trying to hold, Commey just went back into the ropes.  Lopez did not let up on the assault forcing the ref to stop the fight.   A redemption of sorts for Lopez, who did not look like himself in his previous fight among rumors of family issues.  Commey was in the corner almost inconsolable and near tears.  The newly crowned IBF Lightweight champion has a lucrative unification fight with Vasyl Lomachenko waiting for him sometime in 2020.

The main event of the evening, Terence Crawford (35-0 27 KO’s) vs Egidijus Kavaliauskas (20-0-1 17 KO’s) definitely had a buzz going on around the arena.  Say what you want about Crawford but he is a very solid fanbase and he does draw.  The crowd did go wild for him when he came out.  In contrast, Mean Machine definitely got some very noticeable boos.  But when the bell rang to start the fight that changed.  Crawford, known for switching stances during bout, uncharacteristically started off southpaw.  He kept Kavaliauskas on his toes and hesitant to throw within the first 2 rounds.  In round 3, Kavaliauskas broke through with a whistling right hand that buckled Crawford and sent him to the canvas.  To the surprise of everyone, the ref ruled that it was a slip. Emboldened by the result of that right hand, Kavaliauskas gained more confidence and went right after Crawford.  His right hand was finding the mark more often than not.  Within a couple of rounds, you can see swelling developing around Crawford’s right eye.  This was becoming a true dog fight that no one expected.  In round 7, the first official knockdown was scored by Crawford where his right hand sent Kavaliauskas down to one knee.  Crawford proceeded to keep his foot on the gas and hammered Kavaliauskas in the 8th round, buckling him with huge right hands and a right uppercut.  In the 9th round, Crawford dropped Kavaliauskas 2 more times. The uppercut finding its mark on a fading Kavaliauskas.  The ref would immediately wave the fight off after a right hook sent Kavaliauskas down to a knee.  An unexpected and entertaining gut check for Terence Crawford who retains his title and keeps his name alive in the conversation of the best welterweights of in boxing today.   One thing I did think was becoming an actual issue was I think Crawford might be reaching the point of “spoiling on the vine”. Mean Machine is a good fighter but not expected to trouble an elite fighter like Crawford.  I hope sooner than later, we see Crawford in a fight that we can get up for before total spoilage occurs that ruins some attractive matchups for him. 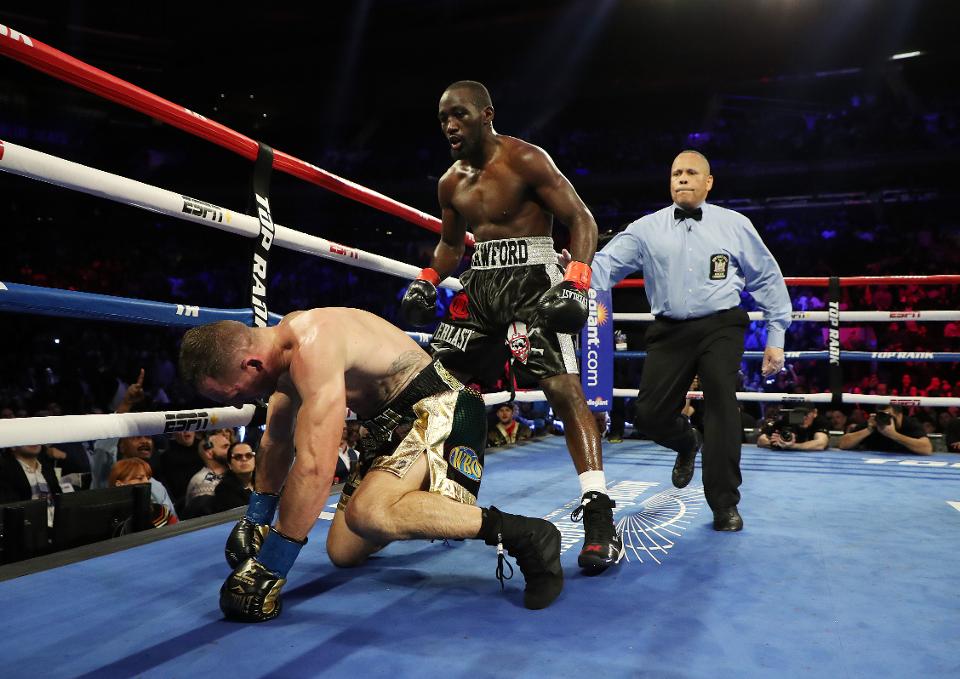 Yesterday, Patscorpio took a trip to Madison Square Garden to cover the Terence Crawford title defense. Here’s some of the visuals from his journey. King P also made a guest appearance as well.

Everyone makes weight. Ladies and gentlemen, we have a fight.