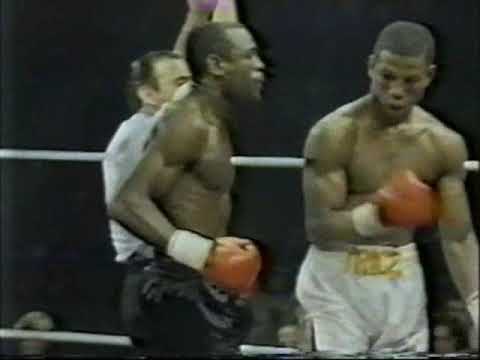 Shedding light on this fight came to me while watching an infamous moment on the now defunct USA Tuesday Night Fights program.  Tyrone Trice, after savagely knocking out someone, got on the mic to challenge James Toney, who was ringside.  Toney, being who he was, got into the ring without hesitation and told him “Bring your ass Tyrone, we can get busy right now!!!” Of course, cooler heads would prevail that night even though the fight never came up.  But it did make want to see some of Tyrone’s fights.  One fight that did pop up was his first fight with Simon Brown.  I have always been fan of 15 round fights.  I also have the opinion that today’s world title fights should also go to 15 rounds.  It would stop all the dodgy, suspect decisions that have been going on lately.  By 1988, 15 round title fights were becoming more and more rare and the IBF was the last sanctioning body still going strong with it.  This fight would be for the vacated IBF Welterweight Championship, last held by Lloyd Honeyghan.  This would also be the first world title challenge for both fighters.

The first couple of rounds were noteworthy of the power that Tyrone Trice had.  Trice looked like he had a surge of adrenaline.  He came out immediately swinging, getting in the trenches with Brown.  A left uppercut by Trice badly wobbled Brown halfway through the first round.  Brown was able to weather the storm and return some firepower of his own.  The second round, Brown was not as lucky.  More than willing to be in the trenches with Trice, Brown ate a huge left hand from him.  Brown backed into the ropes where Trice followed up with a barrage.  A right hand as Brown was coming off the ropes floored him for the first time in his career. Brown again was able to weather the storm although he did get tagged again at the end of the bell.  Simon Brown, knowing that Trice can hurt him, made a very necessary adjustment.   Brown turned into an out fighter, picking his shots better.   He also created distance to lessen the sting of the blows if not have him miss completely.  When Trice came inside to bang, Brown immediately held or did his best to take the shots on his arms.  It was not like Tyrone Trice was not boxing well in the fight.  He was able to cut off the ring very well and jabbed consistently.  He had his moments here and there in rounds 3 through 6 tagging Brown with shots.  Brown also did another thing to take some of the steam off Tyrone’s pressure and punches.  He whipped off some serious body punches on the inside.

As the fight got into the latter half, Brown slowly morphed into the aggressor.  He had finally managed to wobble Trice with his own right hand.  He also started hitting every legal spot as possible.   He started beating up Tyrone’s on the arms mixing up with uppercuts.  Tyrone, surprisingly, never made any adjustments or changes from how he started the fight.  By now, he was only landing only 1 punch at a time.  Brown was jabbing and starting to land at will from the outside.  Round 10 was a round off ebb and flow.  A fading Tyrone Trice was starting to wobble from the accumulated punishment.  He almost went down from a series of right hands.  But true to his nature, he fired back temporarily to get himself out of trouble.  Trice though was fighting more flatfooted and look tired.  Brown was able to land combinations and have him in some more trouble as the round ended.  A break came for Tyrone when the ref took a point away from Simon for punching after the bell.  An infraction he had been warned about earlier in the fight.  Trice seemingly had found a second wind and boxed a lot better in the 11th.

The 12th pretty spelled the beginning of the end when Brown finally manages to drop Trice not once, not twice, but 3 times.  To be fair, one of those knockdowns seemed to be caused by a push followed by a punch landed while Trice was on the canvas.  Trice was in all sorts of trouble as the round ended.  Simon thought the fight was over even though the ref Steve Smoger told him otherwise.   That would only delay the inevitable.  Tyrone Trice was out of the fight physically by now.  He was getting rocked around the ring by Brown while Trice’s wife looked on with worry.  Trice would get out of the round but not before another punch after the bell followed by some retaliation.  The 14th round would see Brown dropped Trice for officially the 4th time in the fight.  Trice somehow gets up and the fight should have been stopped.  Trice was wobbling all the over the ring taking more punishment.  Brown would land a final brutal left hook on a helpless Trice, which turned him into a bobble head.  Ref Steve Smoger would step in at that point to give Brown the win and IBF Welterweight Title.  At the time of the stoppage, one of the judges had Brown winning comfortable 126-122 while the 2 other judges had Trice up with scores of 124-123 and 123-122.  Even though Trice had faded, he was not completely out of the fight score wise.  What an extraordinary fight that was!!! As I mentioned before, 15 rounds separate the men from the boys in my humble opinion.

The aftermath for both fighters as they were relatively young would go into different directions.  A rematch would happen almost 2 years later when Brown would dominate and repeat his stoppage over Trice in 10 rounds. Simon Brown would hold on to the title until 1991.  Along the way he would partially unify his IBF belt with the WBA belt by beating then champion Maurice Blocker. He would vacate the IBF belt shortly after. He would lose his other belt to the brilliant James “Buddy” McGirt.  Two years later, following a move to 154, he would shockingly upset then WBC 154 champion “Terrible” Terry Norris in only 4 rounds.   He would lose the belt almost 6 months later back to Norris.  From there on a slide came in his performances.  He would be on the receiving end of a highlight reel knockout from Vincent Pettway in a title shot at 154 pounds.  He would move up to Middleweight and came up short in title shots against Lonnie Bradley and Bernard Hopkins.  Simon Brown was unfortunately a case of a fighter going on too long as he retired in 2000 winless in his last 6 fights.  Tyrone Trice unfortunately would never win championship gold.  After coming short in the rematch in the fight with Brown, he would move to 154.  He challenged then WBO champion John David Jackson and would lose a unanimous decision.  He would find an even less success going up to middleweight losing to notables such as Julio Cesar Vazquez and a streaking Joe Lipsey.  Tyrone Trice would retire in 1996 where he would win his final fight, snapping a 3-fight losing streak.  Not much has been heard from either man in retirement, which hopefully has been good to them.  The effort they put forth on that day in 1988 should not be forgotten.  Full recommendation to watch.