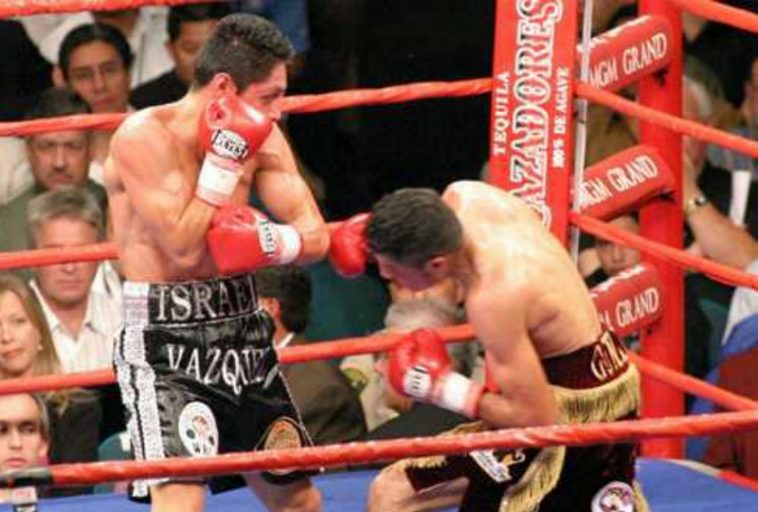 So how did I come across picking this fight you may ask?  Well with boxing currently on hiatus due to corona virus, I was like let me go ahead and do another Forgotten Fade article.  To be optimistic, it has made go back even more into the archives to watch old fights.  When boxing has been a part of your life for such a long period of time, it is hard to break the habit.  So, it has been quite the adjustment for my weekends, where I usually look forward to sitting down on my couch and catch the latest cards on ESPN, FOX, Showtime, or DAZN.  I hit up Shutterworth da Gawd and asked what division I should be focused on this time? He said, “Look at 118 or 122”.  Then he mentioned Abner Mares, who I was not too keen on doing an article about.  I still hold a little grudge over the Agbeko fights, and I didn’t want to glorify him in any way.  Shutterworth and I had a brief back and forth on it and I mentioned Jhonny Gonzalez sending Mares to the bushes in 1 which was awesome.  Then I said that Gonzalez had some fades and mentioned the fight with Israel Vazquez, which I had remembered being awesome.  So, in the middle of the night I rewatched the fight on YouTube and was like “this kicked so much ass.”. The next day, I told Shutterworth this was the fight I wanted to highlight for this article.

This fight was for the WBC Super Bantamweight Title, the 2nd defense of the title by then champion Vazquez.  For Jhonny Gonzalez, then WBO Bantamweight Champion, it was a chance to move up and win a belt in a second division.  It took place on the undercard of Marco Antonio Barrera vs Rocky Juarez rematch.    Both men were right in the middle of their primes.   This fight was a tale of two fights.  It started off with both boxers having a little feeling out round.  Keeping their distance and using their jabs as stated by the late great Emanuel Steward.  But from the start of round 2 it didn’t take Gonzalez long to get going.  His jab and right hand caused a blood blister to appear on Vazquez right eye in contrast to shots returned caused blood to come from his nose.  In Round 4, within the opening seconds Gonzalez floored Vazquez with a beautiful left hook lead that deposited him right on the seat of his pants.  Vazquez though got up in little to no time, a look of frustration over getting dropped trying to get inside.  The left hook it seemed was not too flush just happen to catch Vazquez slightly off balance.  For the rest of the round Gonzalez started whipping 3-4 punch combinations onto Vazquez, whose right eye was still bleeding. This continued for a couple of more rounds with Gonzalez throwing punches with almost near reckless abandon. Sometimes reckless to the point where he would be off balance and Vazquez would be trying to get inside to take advantage of.  Near the end of round 6, Gonzalez would land 3 consecutive right hands that landed flush followed by a whipping left hook that again sent Vazquez to the canvas.  This time that left hook seemed to really hurt Vazquez as he got up with his mouthpiece sticking halfway out of his mouth.  Lucky for him the bell sounded as Gonzalez moved in. He would need all the time in the corner to recover.  Jhonny’s ring generalship and knockdowns gave him a sizable lead on the cards halfway through the fight.  The second act of that fight though would change things almost immediately. In round 7, Gonzalez is stepping on the gas whipping combinations from head to body seemingly going for the KO. With a minute left, Vazquez counters Gonzalez’s uppercut on the inside with a quick right hand which rocks Gonzalez.  A follow up 1-2 combination would put him on the canvas split legged.  What a turnaround that was!!!  In the 8th round, it looked like Gonzalez had taken control, but you couldn’t help but noticed that he was getting more and more busted up.  Vazquez’s mentality at this point was “KNOCKOUT.”  There was a moment where it looked like a hook to the body dropped Jhonny to the canvas again, but the ref ruled that a slip.   In round 9, Gonzalez started looking increasingly sloppy. Throwing punches and being completely off balance and Vazquez closed the distance even more.  In Round 10, Jhonny throws an errant low blow which earned him a stern warning from the ref who told him a point deduction would be next.  With almost a minute left, Vazquez connected with a 4-punch combination that drops Gonzalez for the second time in the fight.  Gonzalez gets up although looks very beaten up at this time.  While the ref was getting ready to send him out to fight, Jhonny Gonzalez’s cornermen came on the apron and waved the white towel to signal the end of the fight.  Larry Merchant and Emanuel Steward were voicing their displeasure loudly at the corner stoppage. Israel Vazquez clawed his way back from being significantly down on all 3 cards to win and retain his title.  It was an extraordinary fight between 2 of the most top-level super bantamweights at the time.

Each fighter would go on their own unique paths after this fight.  For the winner and still super bantamweight champion Israel Vazquez, he would go on to earn more acclaim in 3 straight fights with Rafael Marquez.  Each fight a ridiculous war which would see both men knock chunks of flesh along with their primes off each other.  All 3 of those fights took place within a year.  The first fight saw Vazquez surrender his title by a 7th round TKO to Marquez in war.  The second fight saw Vazquez regain his title by 6th round TKO.  The third fight with Marquez would see Vazquez retain his belt via split decision.  Vazquez though would pay a very high price for these fights with a detached retina which would keep him sidelined for a year.  When he came back 19 months after the 3rd Marquez fight, he looked very much badly faded struggling to score a 9th round TKO over journeyman, Angel Priolo.  Then in his final fight, he took on Marquez in a 4th fight that respectfully should have never happened.  Marquez would stop him in 4 rounds.  A final career record of 44 wins against 5 losses with 32 coming by way of knockout.   In retirement, Vazquez had been struggling with the retinal injury that he got from the Marquez fights.  Numerous operations on his damaged right eye proved to be unsuccessful resulting with it being removed and being replaced with a prosthetic.  A very high price to pay indeed.   Jhonny Gonzalez would go on to lose his bantamweight title in an upset 7th round KO loss to Gerry Penalosa.  He would also fail in a second attempt to become a super bantamweight champion against then champion Toshiaki Nishioka.  He would rebound and finally achieve his goal of being a champion in 2 weight divisions. Defeating then WBC Featherweight champion Hozumi Hasegawa by a 4th round TKO.  He would keep this belt for a little over a year before losing it on an upset technical decision to Daniel Ponce de Leon.    His biggest win and upset to date would come in 2013.  He scored a decisive 1st round KO of an undefeated Abner Mares for the WBC featherweight title.  He would keep for it for a year and half before losing it to Gary Russell Jr.  As of August 2019, Jhonny Gonzalez is still an active fighter and a veteran of 79 fights.  In the twilight of his career but I wouldn’t put it past him to win a big fight one last time before he hangs it up.  But the fight these two waged was something else and should not be forgotten. Full recommendation to watch.