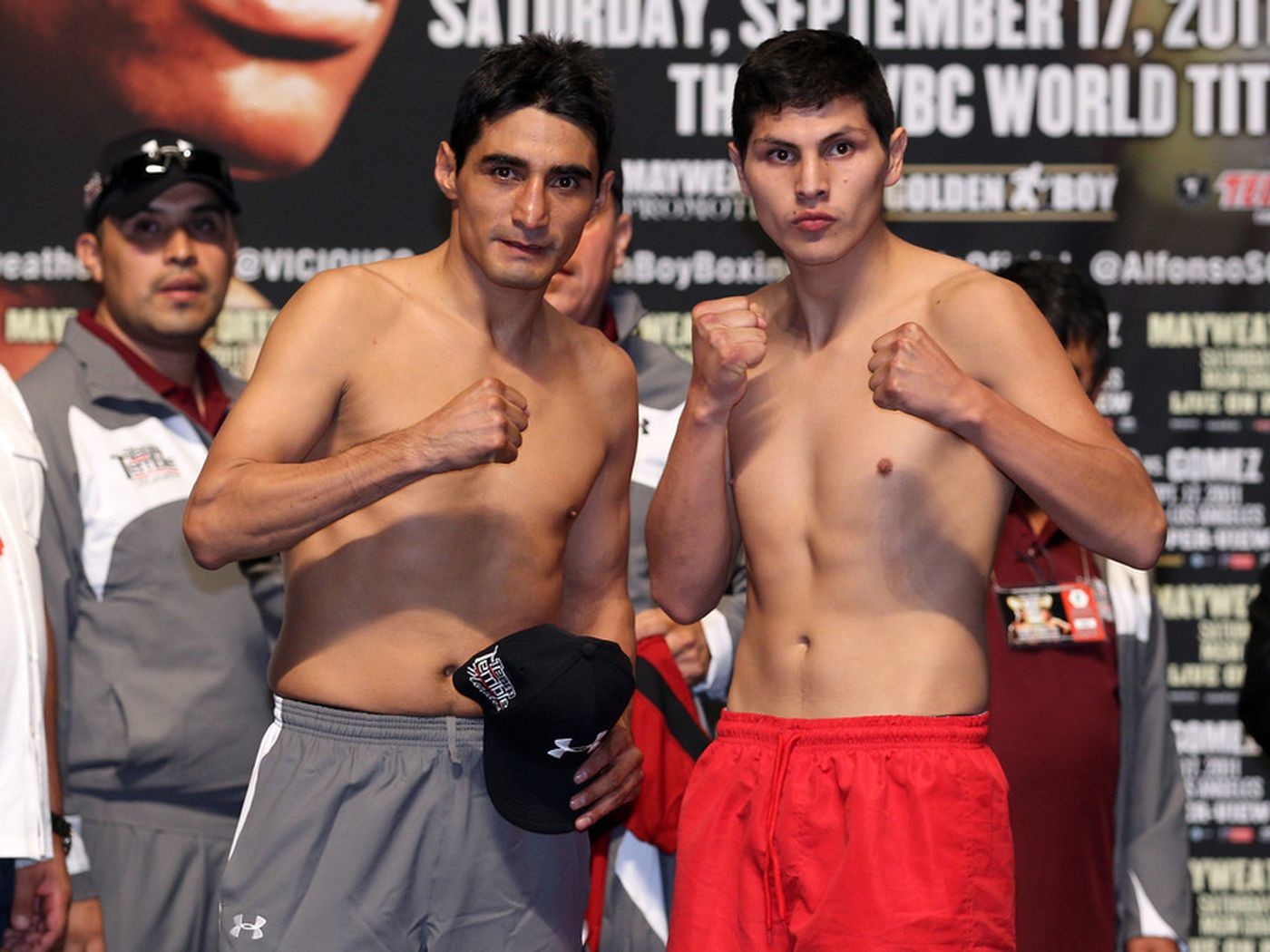 In 2005, Erik Morales, “El Terrible”, was possibly at his highest peak as a fighter when he decisioned a streaking and hot Manny Pacquiao over 12 rounds in the first of their fight trilogy.   To fan the flames of interest some more for a lucrative rematch, both men would appear in an HBO doubleheader against different opponents.  Pacquiao would go on to face and knock out Hector Velasquez in 6 rounds.  Morales would move up to 135 and face Zahir Raheem.  To the surprise of many, Raheem would end up soundly defeating Morales by a unanimous decision.  This would be the beginning of the end regarding the pound for pound status that Morales had enjoyed for quite some time.  He would face Pacquiao in the 2nd fight and would be TKO’ed in 10 rounds, the first knockout loss in his illustrious career.   A 3rd fight would bring closure to the trilogy as Morales would again be stopped in only 3 rounds.  Morales would try to not only become champion again but be the first Mexican fighter win belts in 4 divisions.  He would face then WBC Lightweight Champion David Diaz who he would lose a close but clear unanimous decision. With 4 losses in a row, it seems that the aging “El Terrible” was finished as a fighter.  He would announce his retirement in the post-fight conference.  It was a retirement that would not last.

After nearly 3 years out of the ring, resting his body, Erik Morales made a return to boxing.  This run he would be competing at 140 pounds.  He would rattle off 3 straight wins against non-descript opponents before taking a fight against Marcos Maidana for the interim WBA Super Lightweight title.  Most, I included, expected that the aging Morales, would catch a beating from a young, prime Maidana.  To the surprise of many, he managed to summon up an extraordinary effort and nearly fought Maidana to a standstill by the end of the bell.  A badly swollen eye, Morales had managed to battle past that in the early rounds and hurt Maidana several times before Maidana rallied back.  Morales would lose a majority decision but won a lot of praise for his effort.  Morales was then given a spot on the Floyd Mayweather vs Victor Ortiz against Lucas Matthysse.  Matthysse would pull out with a respiratory infection.  Enter Pablo Cesar Cano, a then undefeated young puncher from Mexico who was also unranked.  Cano was also unknown on the world stage and was given an opportunity to share the ring with his legendary countryman.  An added plus was the vacant WBC Super Lightweight Championship being on the line.  The belt was stripped from then champion Timothy Bradley, who was given a “Champion in Recess” status due to inactivity.  This was a controversial move on top of an unranked fighter for a world title. However, the stage was already set for what would end up being a thrilling fight.

The opening round saw both men feeling out each other with Cano getting the slight advantage with work rate and his movement.  In the 2nd round, Cano manages to wobble Morales with a nice combination.  Morales did fire back and applied more pressure to young Cano standing in the pocket and landing some vicious punches in the next couple of rounds after.  Cano was only happy to oblige the older man.  In round 5, Cano noticeably staggered Morales with a right hand before both men traded back and forth to the bell.  A cut had also open above Cano’s eye, a foreshadowing of the physical damage to come.  The sight of blood seems to invigorate Morales in round 6.  Morales was applying a very steady beating on Cano, swelling up one of his eyes.  Cano, in round 7, returned the favor and opened a cut over Morales eye that had him pawing at it.  Morales was again starting take some noticeable punishment.  Blood was flowing freely at this point, but Morales still moved forward on Cano.  The spirit was willing, but the flesh was weak.  Truer words that never spoken in the case of Cano whose face was starting to fall due to the amount he had taken. Both of Cano’s eyes were swelling up and his nose appeared to be broken.  Cano valiantly tried fighting back but his punches were rapidly losing steam.  By the end of the 10th round, Cano’s face, especially his eyes were too damage from Morales’s precise punching to continue.  His corner stopped the fight and Erik Morales became WBC Super Lightweight Champion.  The first Mexican fighter to win titles in 4 divisions.  Truly an astonishing feat for “El Terrible”.

The win over Pablo Cesar Cano would be the final one for Erik Morales.  He would go on to make his first title defense against Danny Garcia.  Unfortunately, he would come in a couple pounds overweight and lose his belt on the scales.  Although he had some moments in the fight, Morales was overwhelmed by the younger man and would lose a very clear unanimous decision.  A rematch would take place 7 months later.  The fight would go a little differently than the first one. Garcia laid a one-sided beating on “El Terrible”, punctuated with a brutal left hook that sent him into the ropes for the stoppage.  Originally planning to fight on afterwards but had a change of heart and officially announced his retirement in 2014.  Post boxing life has been good to him.  From being a trainer to being elected to the Mexican version of the Congress, he is living his best life.  As for Pablo Cesar Cano, this fight put him on the attention of the world level.  He would receive one more world title shot against then WBA Welterweight Champion Paulie Malignaggi.  Unfortunately, Cano would not make weight for that fight thus he could not win the title.  Nevertheless, the fight still went on and he would give Paulie absolute hell for 12 rounds.  He would end up losing a narrow decision to him.  He would follow up that by giving Shane Mosley a tough fight losing another decision.  After that, his performances in the ring got spotty and uneven.  As of 2021, he is still an active fighter signed to Golden Boy.  He is still capable of giving fighters trouble such as scoring a very surprising 1st round TKO over Jorge Linares a couple years ago.  We do not know if he will ever pick up a world title but at least he can say that he gave a future HOF’er all that he could handle in a war that should not be forgotten.