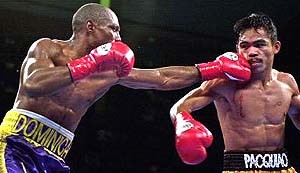 First of I want to start this article with the following.  Manny Pacquiao is an undisputed all time GOAT in boxing.  We will not see another fighter like him for a very long time.  Imagine someone who was a flyweight would go on to win titles up to light middleweight.  An incredible feat to accomplish.  We all hope and wish the “Pac-man” has a happy and healthy retirement as he goes on to campaign for presidency of the Philippines.  I know most people are very familiar with the big fights he’s been involved for the better part of the last 20 years.  There are also some that did fly under the radar, or some not mentioned at all.  If you look on Manny Pacquiao’s record, you see that he has 2 draws.  One of them being against Juan Manuel Marquez in their 1st fight.  If not for a scoring error would be a split decision victory for Pacquiao.  The other draw has more of a case of being one.  The topic of this latest “Forgotten Fade” article – Manny Pacquiao vs the late Agapito Sanchez.

This followed an unexpected triumph in beating then IBF Super Bantamweight champion, the late Lehlo Ledwaba, as a last-minute replacement in his American debut.  In the first of only 3 unification fights in his career, he was matched up against the experienced then WBO Super Bantamweight champion, Sanchez.  This fight took place on the undercard for Floyd Mayweather vs Jesus Chavez.  Notable for being the first card to feature both Mayweather and Pacquiao.  Sanchez had a very notable and well-learned reputation for being an extremely dirty fighter.  One of his boxing nicknames was being called “Dirty Sanchez”.  He would give hard fights to the likes of Marco Antonio Barrera, Juan Manuel Marquez, Freddie Norwood, and Guty Espadas Jr.in losing efforts.  He would finally be crowned champion, in his previous fight, winning the vacant title vs Jorge Monsalvo in 7 rounds.     This stage, airing on HBO, was now set.

From the opening bell, Pacquiao was looking to land his vaunted left hand against Sanchez to establish himself early in the fight.  However, a lot of those left hands were missing Sanchez, whose educated footwork kept him away from the power shots. In response, Sanchez started landing his own right hands after series of tit for tat feinting and jabbing.  Right hands that Pacquiao was walking right into.  In the closing seconds of the fight, Pacquiao did land a nice left hand on Sanchez but not enough to possibly win the round.   This was probably the only “clean” round in this fight.    Round two started off with a mean clash of heads from both fighters.  Pacquiao immediately grimaced and started pawing at his forehead.  A big cut opened over his right eye with blood just gushing out.  It was the type of cut that you couldn’t even blame the ref or the doc if they wanted to wave it off then.  After a quick check from the ringside physician, the action resumed.  Sanchez immediately targeted that cut to a Pacquiao who was clearly affected by it. Blood getting into the eye, he couldn’t pick up Sanchez’s punches in a timely manner and started swinging wildly.  Pacquiao would once again make a late rally at the end of the round. Round three Sanchez purposely threw a low blow at Pacquiao hitting him right in the cup.  Pacquiao grimacing and taking a knee in the corner.  After a brief reprieve, Pacquiao continued and start landing some 1-2’s on Sanchez, who seemed a little surprised.  Fight seemed to be heading into another shift of momentum.  So, Sanchez dug into his bag of rule breaking tactics and used the open hand of his glove to lace Pacquiao across the face.  That was more than enough for the ref to deduct a point from Sanchez.  An automatic round for Pacquiao.

Round four you see more of the dirty tactics from Sanchez.  In between brief spells of actual solid boxing from Sanchez of Pacquiao were clinches, headlocks, and more low blows.  One low blow landed which had Pacquiao writhing in pain on the canvas.  This caused the ref to deduct another point from Sanchez.  This was an ugly fight that I think the ref was losing control of. After that though Pacquiao turned vicious and got the better of toe-to-toe exchanges with Sanchez.  When that round ended, Sanchez was bleeding from a cut himself.  Round five saw Pacquiao finally making some mid fight adjustments.  The left hand that had been missing Sanchez before were now starting to land more frequently.  Sanchez in response took advantage of the compromised right eye of Pacquiao by landing left hooks on it. Say what you want about Sanchez, but he was up for this fight.  Even as his efforts were starting to tire him.  Round six would be the final round of the fight as both men clashed heads again the in the center of the ring.  That convinced the doctor to stop the fight.  Rules stated that partial rounds had to be scored for technical decisions.  The official scores were as followed: Pacquiao 58-54, Sanchez 57-55, and an even 56-56 for the split decision draw.  If not for the point deductions by Sanchez, he would have walked away with a split decision and 2 of the super bantamweight titles.  Team Pacquiao in the aftermath of this fight stated they had no interest in pursuing a rematch.  In response Sanchez mentioned that Pacquiao did not have heart and was crying too much.

The career aftermath of both men took a wildly different turn.  A small speed bump for the career trajectory of Manny Pacquiao.  I don’t we need to mention what happened with Manny Pacquiao after this fight.  He would go on to have one of the greatest careers in boxing.  Unfortunately, the same cannot be said for Agapito Sanchez.  He would go on to lose his title in his next fight to a then undefeated Joan Guzman.  Although he won the last 5 of his 6 fights, the competition was getting lighter.   In November of 2005, Agapito Sanchez would be killed by an off-duty police officer in the Dominican Republic.  It was reportedly after Sanchez took offense to something the policeman said to Sanchez’s girlfriend.  An unfortunate and tragic end.  Even with the fouling and rough housing, it was probably a fight that has necessary for the continued development of Manny Pacquiao.  It’s also never really brought up especially in the wake of Manny Pacquiao’s retirement.  However, it doesn’t mean it should be forgotten. It was really a hell of a “Forgotten Fade”.  Full recommendation to go and watch.