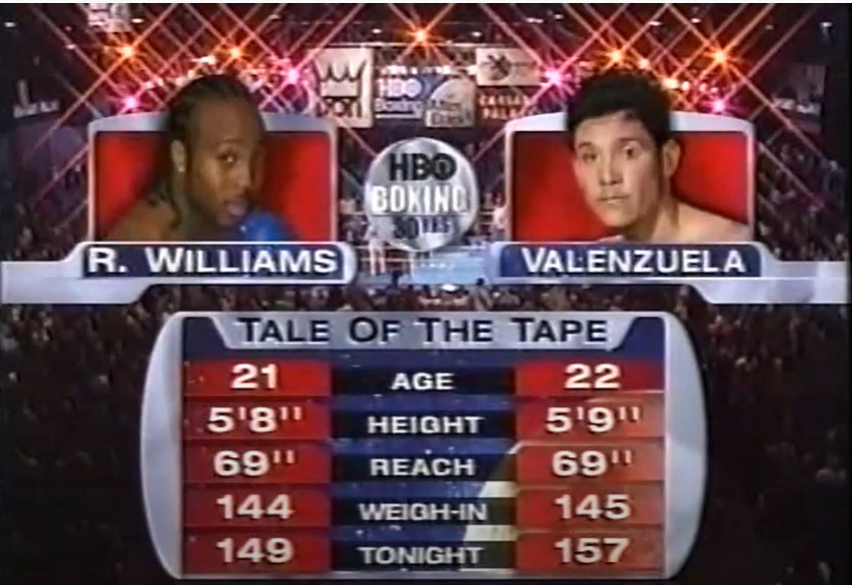 Sometimes we get fights that for one reason or another that has a fighter that pulls out and they are replaced with a different fighter.  Sometimes that different fighter maybe looking for a second chance redeem themselves and turn their career around.  Sometimes that results in a fantastic fight happening.  Sometimes an unexpected result that happens that no one thought would be possible or feasible.  This is the tale of Ricardo Williams Jr vs Juan Valenzuela.

Ricardo Williams Jr was a highly touted prospect from Cincinnati, Ohio.  At the 2000 Olympics Games, he had a good showing and came back with the silver medal.  After which he would turn pro and sign with Lou DiBella along with some of his Olympic teammates.  “Slick Ricky” showed glimpses of being a future champion within his first couple of fights.  He displayed a very entertaining boxer puncher style who whipped beautiful combinations into his opponents.  In his 9th professional fight, he would score a very impressive victory soundly outpointing former IBF world light welterweight champion Terron Millett over 10 rounds.  With the good however there was the bad.  When Ricardo signed with Lou DiBella, he received a signing bonus of $1.4 million dollars.  That amount was unprecedented for a debuting fighter.  A millionaire before accomplishing anything significant in the ring, he also started showing signs of being underconditioned and listless.  This would plant the seeds of destruction for him and his career.

Juan “El Pollo” Valenzuela in contrast, did not have such an illustrious debut.  He debuted a year earlier in 1999.  His career was a tougher road travelled as he worked his way up the ladder. In 2002 we burst on to the world stage when he upset future world champion Julio Diaz on an episode of “ESPN Friday Night Fights”.  Diaz was just coming off a very close split decision loss to Angel Manfredy in a lightweight title eliminator, which was his first loss. In his second fight from that loss, he faced “El Pollo” and was shockingly knocked out standing up in 1 round.  Unfortunately for Valenzuela, he would follow that upset win with 2 straight losses to then highly touted prospect Alex Trujillo and hard punching journeyman Ernesto Zepeda.

The fight was scheduled as the main undercard support for Tim Austin vs Rafael Marquez.  Ricardo was originally scheduled to face Juan Carlos Rubio but Rubio ended up pulling out of the fight.  So “El Pollo” was penciled in as a last-minute replacement.  This was scheduled to be a 10-round fight at 140 pounds.  However, Ricardo would be overweight by 1 pound on top of Valenzuela also weighing at 144. It was changed to be contested at welterweight.  The fight night weights would show Ricardo Williams at 149, Juan Valenzuela at 157.  Once again, questions were raised on Ricardo’s commitment and dedication to his training.   On that night, live on HBO, some of those questions would be answered.

From the opening bell, Valenzuela put the pressure on Williams and moved forward.  Valenzuela would let both hands fly eager to test the smaller man’s chin.  Williams was able to move back and land some nice counters. However, the counters did not really seem to faze much less stop any of Valenzuela’s momentum.  What also was apparent was that Ricardo Williams was not conditioned for a fight like this. From Round 2 on, you can see him with his mouth open as he moved around the ring.  In between rounds, you could see him in his corner taking deep breaths.   Round 3, Valenzuela keeps moving forward on Williams starting to land some big shots.  That constant pressure from a bigger man had Williams on edge.  His legs starting to get heavier, Williams opted to start standing his ground to trade.  In doing so, Valenzuela started mixing up his head shots with some vicious body work.  The end of the 4th round, the crowd exploded as both men landed power shots on each other.  The middle rounds saw Valenzuela start taking control of the fight.  When Williams fights off his backfoot, Valenzuela is in full pursuit.  “El Pollo” barely giving him any room to set and land too many effective counters.  Failed to get his respect, Williams started getting outworked and taking some unnecessary shots. He was being bullied into the ropes catching combinations upstairs and downstairs.  One thing that I could not help but notice: “Slicky Ricky” was a tough guy and had some steel resolve in him.  This had been an incredibly rough fight for a prospect to go through.  That resolve would be tested even more in the later rounds of the fight.

In round 8, Valenzuela found his mark and was hitting Williams repeatedly with power shots.  At one point in the round, Ricardo does answer back with a combination of his own.  Valenzuela’s response:  Turns away and does a shimmy type of dance much to the delight of the crowd.  Then he turns back and increases his punch rate on a fading Ricardo Williams.  The late great Emanuel Steward noted in his commentary that the punches that Williams was throwing at this point were almost shoeshine.  That was a huge round for Valenzuela.  The 9th round saw Valenzuela press harder on the gas pedal and just pounds Williams all over the ring.  A series of straight right hands and uppercuts followed by a 1-2 combination had Williams on the verge of being knocked out.  In fact, the only thing Valenzuela did wrong in this round was mistake the 10 sec warning to be the end of the round.  He started prematurely celebrating before the ref turned him around to fight.  In the 10th and final round, you can sense the fight is incredibly close.  The late Harold Lederman had it 86-85 for Williams on his scorecard.  Valenzuela, showing signs of fatigue for the first time in this bout, still did not shy away from his game plan.  Williams would eat a huge shot from Valenzuela and then come back with hard counters.  They would end up trading toe to toe as the final bell rang.  What an extraordinary fight and showing of guts by both fighters.   It would be an unfortunate first loss for the former Olympian Ricardo Williams Jr. Juan “El Pollo” Valenzuela would win a unanimous decision with scores of 98-92 and 97-93 x 2.

The aftermath for both fighters would see their career trajectories go off different directions.  For Ricardo Williams Jr, he would never regain any of the momentum that he had as a prospect.  Shortly after the loss, Lou DiBella would release him from his contract.  Two fights later, he would suffer an embarrassing upset split decision loss to aging former WBO Welterweight Champion Manning Galloway.  In 2005, he was sentenced to 3 years for drug trafficking charges.  Upon his release from prison, he would resume his career on smaller cards and venues.  He still displayed some of the talent that made him so highly regarded.  He would win 9 straight fights before suffering his first knockout loss at the hands of Carson Jones for the USBA Welterweight Title.  After winning 3 more fights, Ricardo Williams Jr. would retire with a 22-3 record with 12 knockouts.  For Juan Valenzuela, his career momentum only moved upwards.  One of the first fighters that was signed to Golden Boy Promotions, he would rattle off 4 more wins.  During which he would establish himself as a very fan friendly fighter.  However, fate would deal him a very cruel hand.  He was scheduled to fight Miguel Cotto on the undercard for Manny Pacquiao vs Juan Manuel Marquez 1.  A pre-fight exam would reveal a detached retina.  Valenzuela would not fight again for another 3 years.  He returned in 2007 to fight a split decision draw with journeyman Daniel Stanislavjevic. He has not fought since and presumed retired with a 20-6-1 record with 9 knockouts.  The last thing I heard regarding “El Pollo” was the fact he was training some fighters.  To me it is a shame 2 talented fighters turned into 2 notable “What If?” candidates in the annals of boxing history.  My highest recommendation to watch.  You will not be disappointed.