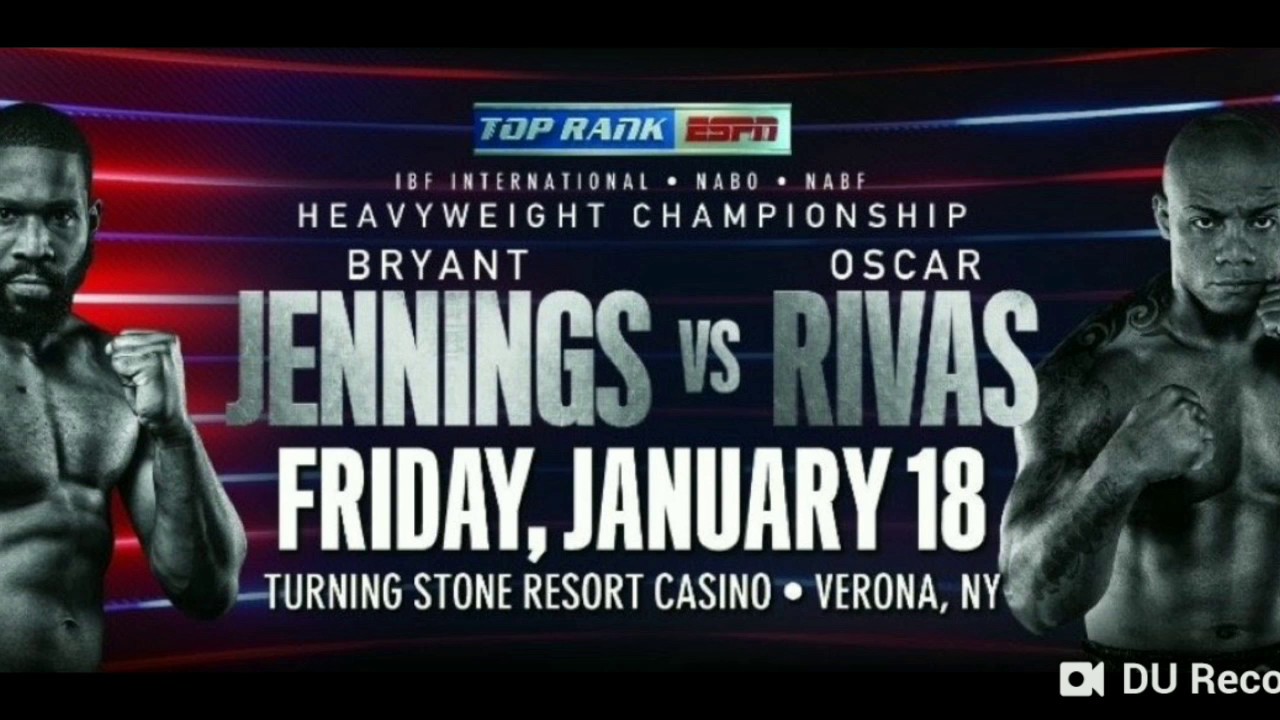 Last Friday was a rarity of some sorts in which there were 2 notable boxing cards airing back to back that night.  Being the huge boxing fan that I am, having options like this warms my heart.  I also felt that it was time to go and catch a card live.  It has been 3 months since I last did so in Boston for Demetrius Andrade vs Walter Kautondokwa.  Top Rank was holding an event at Turning Stone Resort Casino that would be airing on ESPN+.  The main event was Bryant Jennings vs Oscar Rivas for the NABF Heavyweight Title.  Always a fan of watching the Heavyweights go to work so that is always an incentive.  Plus I’ve never been to Turning Stone, which has turned into quite the boxing hotbed in the last few years.  So I decided that I would take a personal day to drive 4.5 hours from my home in Massachusetts to Verona NY.  The drive itself was pretty straightforward although the scenery was low-key depressing with all the snow and rural landmarks along the highway.  I checked into my accommodations, had a quick bite, and took a 2 hour nap before heading out to the casino.

A shot of an exchange between Jason Sosa and Marcos Delgadillo

Parking was very ample and free, as par for most casinos I’ve been to.  The event center was pretty nice.   I went into one of the media rooms to pick up my credential for the evening, talked to some of the other members, and then headed out to ringside to set up in the front row.  The undercard before the main card was pretty entertaining.  Carlos Adames and Fazliddin Gaibnazarov scored impressive stoppages.  Vikas Krishnan made an impressive debut and Robson Conceicao put in a dominating performance over the distance.  However the highlight of the undercard was between former WBA Super Featherweight Jason Sosa and journeyman Marcos Delgadillo.  It’s funny on where you might catch a Fight of the Year candidate sometimes.  This was a phone booth type of war where both fighters would visit the canvas once.  The scores were a little bit too wide for my liking for Sosa (97-91, 97-91, and 96-92) but it didn’t take away from how the great the fight was.  Also a lesson in this is to never judge a fighter by their record.  You may miss the big picture.  Delgadillo (17-19-2, 9 KOs)   I am positive will be a tough night’s work for anybody.  That is real talk.  Thankfully ESPN+ aired it so if you have the subscription or if you see on it YouTube, do yourself a favor and check it out.

The main card opened with Shakur Stevenson facing Jessie Rosales.  From the opening bell it was all Stevenson.  One thing I noticed in this fight from past performances is Shakur seems to be growing into his body and he is planting his feet more to deliver more power into his shots.  He boxed beautifully in the first round and then turned it up in the next 3 rounds.  Rosales was visibly hurt and shook up from those punches.  Finally in the 4th round, Stevenson lands a beautiful short inside left hand and down went Rosales.  Rosales got to his feet but the referee decided that he had enough for the night. With that win, Shakur Stevenson improved 10-0-0 with 6 KO’s.  In the post-fight interview, he expressed interest in a fight with current IBF Featherweight Champion Josh Warrington.

(Photo Credit: Mikey Williams / Top Rank)                 Bryant Jennings vs Oscar Rivas kind of took me by surprise.  Not with the action and how it played out in the ring but for the fact Rivas was fighting in America.  If you look at Rivas’s record, all but one of his fights took place in Canada.  The reason for it is because commissions have not licensed Rivas in the United Stated due to reported eye issues.  So, for the fact he was licensed in NY of all places was a shock to me.  I had read and heard plenty of Oscar Rivas but have not seen him fight so I anticipated on what he could do against a seasoned veteran like Bryant Jennings.  The fight itself was a tense chess match.  There wasn’t a whole lot of action but you could feel the intensity in the ring.  Many of those rounds were incredibly difficult to score because of it.  The finish in the final round was nothing short of sudden and explosive.  Rivas ended up throwing a series of hard right hands that knocked Jennings down to the canvas.  Jennings got up shaky and tried to move to clear his head, but Rivas was on him.  A flurry of punches by Rivas left Jennings almost defenseless as the referee stopped the fight.  At the time of stoppage, judges had Rivas up on 2 cards (106-103 and 105-104) with Jennings up on the last card 106-103.  It was a great victory for Oscar Rivas (now 26-0-0 with 18 KO’s) who finds himself as a new player in the heavyweight/world title scene.  For Bryant Jennings (24-3, 14 KOs) it was an unfortunate setback and he acknowledged as such with the simple phrase “It is what it is”.