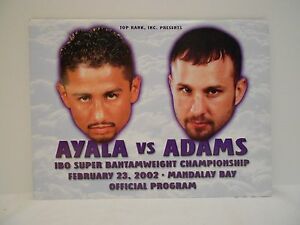 One of the few times I remember being taken aback from somebody I talked boxing with was somebody mentioning this fight to me.  It all started from when I had a conversation with my lady.  This was in the early stages in our relationship.  She told me that she had a friend that was also into boxing like I was.  Now when I hear that, most of the time I’m kind of dismissive to comments like that.  This was when the Floyd vs Manny thing was in full swing and by then I was more than over the talks with people taking either side to the extreme.  Her friend would later friend request me on Facebook.  One day I made a post about the greatest fight of all time IMO:  Diego Corrales vs Jose Luis Castillo 1.  He posted under it and mentioned Clarence Bones Adams vs Paulie Ayala 1 as his favorite fight of all time.  I went “Whoa!!!” and replied back “That’s a fight you don’t hear somebody mention every day.” I mean I was seriously impressed.  We then had one of the longest conversations ever under that post.  My lady read all that and was like “I told you so!!!”  This fight is one of those that is so unheralded that someone mentioning it to me suddenly will automatically validate as you know something about boxing.

Adams wasted little time on a feeling out process and opened up on Ayala.  Ripping Ayala to the body and piling up the points.   This strategy however left Adams susceptible to counters upstairs as Ayala answered back with mean hooks.  Pretty soon Adams started to show the effects of those punches but it didn’t dissuade him from not staying on the inside.  The fight deteriorated into a phone booth type brawl with some absolutely sickening exchanges. Bones’s eye and cheek were getting puffier by the rounds. I feel for the judges who had to score this fight by this point.  In the second half of the fight, you can see Ayala missing on a lot of shots and Adams closing the gap rolling with Ayala’s punches.  But then you see Adams start to tire and his own activity start to drop.  Ayala took advantage and in the 10th round, rocked Adams with a huge hook.   Then it was followed by more vicious body punching from both men.   This fight is amazing after all the years.

In the 11th round, accidental clash of heads produced a nasty cut over Bones’s eye.  Ayala then targeted the cut, opening it up more.  How the doctor let this fight go on after that round is beyond anyone’s guess.  Maybe he didn’t want the fight to end himself and was into it.  Whatever the case Ayala moved forward on him while Bones tried to fight back.  Bones was caught several more times in that bloody eye.  It’s quite possible he was not seeing those punches coming.  In the final round, Ayala did something that was confusing to me and most likely everyone else.  He got on his bike like he secured the win.  Circling the ring which turned into a run when Bones started lighting his body up.  Then came the clinching when Adams managed to close the gap.  It was a puzzling negative round on Ayala’s part.  When the bell rang, just like I did all those years ago, I thought Bones pulled it out.  My score being 116-113 for Adams.  The first 2 judges announced a 114-113 score for each fighter.  The third judge scored it 115-112 for the winner…..Paulie Ayala!!!  Man you can see the absolute disappointment in Bones’s face but it doesn’t take away on how great that fight was.

After a fight like this it was only right that a rematch had to take place.  6 months later they got it on again which Ayala would win a very comfortable unanimous decision.  Bones would go into a decline, never regaining his championship form or any career momentum.  He would bow out of the sport in 2010 following a TKO loss to Edel Ruiz, a 29-22-4 journeyman.  As for Paulie Ayala, he too would go into a career decline. He would receive a PPV shot against Erik Morales for the vacant WBC Featherweight Title and lose a unanimous decision.  One more win against the aforementioned Edel Ruiz would set him up for what turned out to be his final fight.  A 10th round TKO loss to the great Marco Antonio Barrera in June of 2004.  Both men these days seemed to have settled well into retirement and are still involved in the sport.  Ayala runs a gym and Adams is a trainer with some good prospects on his roster and as well as some vets.   But nothing will ever take away from the greatness of their first fight.  Full recommendation to catch if you haven’t already.