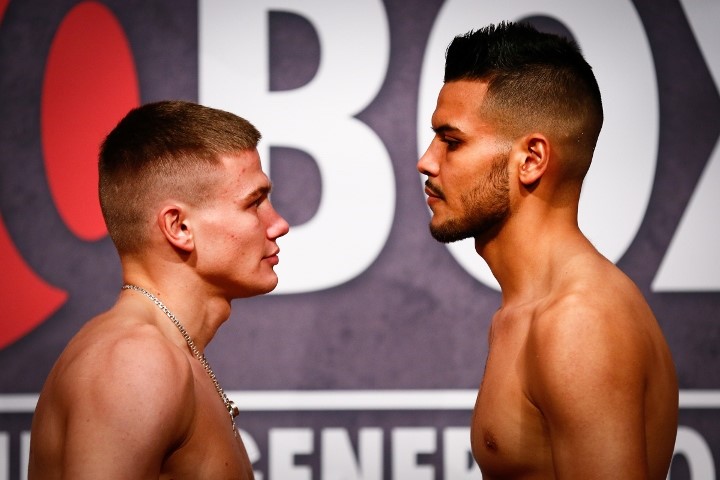 It’s amazing how sometimes the next fight I pick for my Forgotten Fades series can come from random conversation. In this case, this fight came up as Ring Gang was doing a live preview for the Keith Thurman vs Mario Barrios card. I had voiced displeasure at Mario Barrios being in another PPV main event and thought the better solution should have been Abel Ramos. Ramos at the time was scheduled to fight on the undercard vs Josesito Lopez. I thought Ramos would have been a better choice for a main event spot rather than Barrios. Then we started going through the boxing record of Ramos, going down some of the names on it. We got to Baranchyk and Shutterworth and I immediately remembered that it was a wild fight. So that is how this fight was picked for this article. This fight aired on the critically acclaimed Shobox: The New Generation series on Showtime, home of future world champions. The location: Miami, Oklahoma on Feb 10, 2017. Ramos had a then 17-1-2 record with 12 knockouts. His only loss at the time came at the hands of another future world champion Regis Prograis. Ivan Baranchyk was a highly touted prospect with a record of 13-0 with 10 knockouts. At the time, most people would think “Hmmm 2 punchers…this maybe is a good fight.”  I don’t think we were ready for how good this fight would be.

The fight started off with Ramos pumping the jab into the face of Baranchyk. That jab was giving Baranchyk fits as he kept charging. It was controlling the fight up until within the final minute of the third round. Baranchyk would drop Ramos with a corker of an overhand right. I mean he dropped him HARD! Ramos got back to his feet quickly and surprisingly. He went back to jabbing and moving and with 3 seconds to go, Ramos landed a short-left hand that sent Baranchyk crashing to the canvas. Baranchyk got up but he looked very hurt. Lucky for him the bell had sounded. Fourth round continued more of the toe-to-toe action from both men. Ramos looked like he was hurting Baranchyk noticeably with body shots. A double left hook out of nowhere by Baranchyk sent Ramos crashing again to the canvas. Baranchyk is one forceful puncher. The bombs continued into the mid rounds. Ramos re-establishing his jab to set up hurtful combinations on Baranchyk. Baranchyk bringing serious pressure and letting his hands fly with heavy handed combinations when he gets on the inside. The sixth round was another ridiculous round of give and take of both fighters. The later rounds are where we start seeing some separation. Baranchyk’s conditioning would be key as he noticeably took over and started landing heavy shots on a tiring Ramos. Just pushing him on the ropes just banging away. Ramos was returning fire and not making it easy, but his punches were losing some steam. To add on to that, his face was also showing the effect from the heavy punches from Baranchyk. Swollen eyes with a cut that eventually got opened over one of his eyes. In the 10th and final round, it looked like Baranchyk was nearing a stoppage when a final fuselage on punches on the ropes had Ramos reeling across the ring. But it was not to be as the bell rang, just in time. If this had been a 12-round fight, it’s a good chance Ramos would have been finished or stopped in the next round. What a fight this was!!! The punch stats, for a 10-round fight, was impressive. Both fighters landed over 40 percent of their total punches, both landed 50% of their power punches.

The judges read their scorecards: 97-92, 99-91, and 97-93. All for the winner by unanimous decision, Ivan Baranchyk. 2017 opened with some incredible wars and this fight was one of them. One of the best Shobox fights of all time in my opinion. Both men gave it all they had and left it in the ring. Both men would go on to bigger fights. Abel Ramos would soldier on moving up to the welterweight division. He would have close competitive losses to Jamal James and current WBA Welterweight champion Yordenis Ugas. A well come back from behind win over Bryant Perella as well as a career best knockout victory over former WBC Lightweight champion Omar Figueroa. At time this article will be printed, Ramos would suffer a minor upset loss to Lucas Santamaria on the undercard of Keith Thurman vs Mario Barrios. Knowing the type of fighter Ramos, I’m sure he will bounce back and get back in the welterweight mix.  The future however is not as sure for the winner Ivan Baranchyk. Baranchyk would go on to have a brief reign as IBF super lightweight champion, winning the vacant title against Anthony Yigit in the 140 World Boxing Super Series tournament. He would then lose it in a hard competitive fight to the eventual tournament winner and current undisputed super lightweight champion Josh Taylor. After a comeback win, he would face Jose Zepeda in a WBC title eliminator. In one of the greatest violent shootouts of all time, they waged an incredible war. A war where both fighters suffered four knockdowns each before Zepeda knocked Baranchyk cold in round five. Baranchyk laid twisted up and motionless on the canvas for several minutes before being taken to the hospital. The fight took a toll on both men, but it looked like Baranchyk was affected more. His last fight out, he was stopped in seven rounds by upcoming prospect Montana Love. This fight showed a diminished punch resistance, which for a fighter of his style is a recipe for disaster. A loser in three of his last four fights, Baranchyk’s career is in question. However, this fight aged like wine, and it is still a great watch to this day. High recommendation to check out and watch.