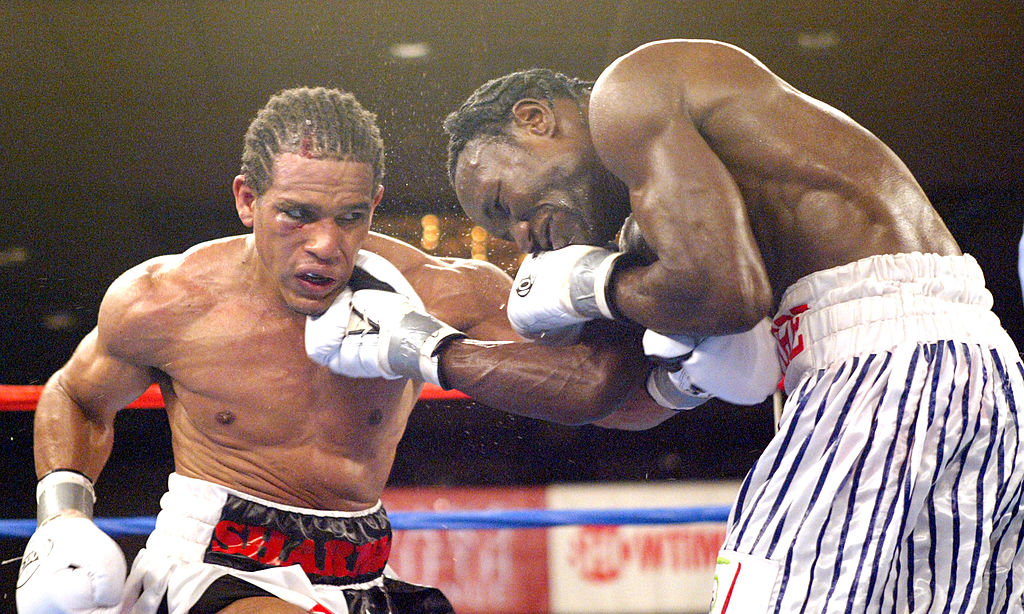 Sharmba “Little Big Man” Mitchell’s name doesn’t get enough mention in today’s boxing world. He fought sixty-three professional fights in his career. A near 3-year reign as WBA Super Lightweight Champion in the late nineties to early 00s. Had solid to good wins over the likes of Bazooka Limon, Rocky Lockridge, Vince Phillips, Terron Millett, and Ben Tackie. The only man to have fought (and lost to) prime versions of Kostya Tszyu, Paul Williams, and Floyd Mayweather. For you boxing trivia buffs, Sharmba Mitchell would be the last non PPV, non-Las Vegas fight for Floyd Mayweather before his ascent into boxing superstardom. Unfortunately, when he is brought up it’s usually as a reference to one of those three defeats to those gentlemen.

If Sharmba Mitchell’s name isn’t brought up like that, then Lovemore N’Dou’s name is brought up even less. N’Dou himself had a very brief reign as IBF Super Lightweight Champion in his 64-fight career. He himself has been in the ring with quite a few notable fighters: Miguel Cotto, Paulie Malignaggi, Junior Witter, Kermit Cintron, Kell Brook, and Canelo. He has never been knocked out either which makes it even more impressive. Mitchell vs N’dou took place on February 7, 2004, live on Showtime. Mitchell, then the IBF’s number 1 mandatory, was originally scheduled to face then undisputed 140 kingpin Kostya Tszyu in a rematch. However, Tszyu had to bow out due to a shoulder injury. N’Dou at the time was ranked ninth the IBF and was penciled in as the replacement. Both men made it clear that they didn’t like each other too much. What was on the line was an interim IBF Super Lightweight belt. If Tszyu didn’t fight the winner next, then the winner would be the new IBF Super Lightweight Champion.

It turned out to be quite the tough scrap for those in the crowd and who tuned in. Mitchell, a southpaw, came out looking vintage. Sharp and quick but also coming forward on N’Dou with sharp jabs. N’Dou looked like he was having trouble trying to find his range on Mitchell who was deftly avoiding the combinations being thrown his way with educated feet and good head movement. Mitchell would then let off fast combinations on N’Dou while making him take a step back. However, that would not last for long. In the third round, N’Dou started landing his right hands on Mitchell.  N’dou was lunging with the right hands which Mitchell seemed to have trouble dealing with. Let me tell you they were hard, fast, and audible right hands that made Mitchell hold immediately. The power shocked Mitchell and had him all out of sorts. Mitchell then decided to focus more on the body and threw pitty-pat combinations in hopes to slow down N’Dou who was gaining momentum. In the next three rounds, N’dou started switch hitting which Mitchell had trouble dealing with. The southpaw jab, left hand, right hooks were all landing with noticeable effect. What also was landing were some headbutts as the way N’dou was throwing punches led to head clashes. That would open a cut right on Mitchell’s forehead.

In the middle rounds, N’dou seemed to hit a wall and gassed. Sensing that, Mitchell found a second wind and went on the offensive. Pushing N’Dou into the ropes and letting off combinations to the body and head. As the fight progressed into the later rounds, Mitchell uncharacteristically was squared up more than usual to land his shots. This would lead to him getting clocked every now and then with the right hands from N’Dou. The final two rounds did see N’Dou find a second wind and come on strong. The last minute of the 11th round was wild to see. Toe to toe exchanges punctuated with Mitchell slipping and going face first in the middle of a combination. Thankfully, he did not reaggravate a knee injury. In the final round, Mitchell’s face looked swollen and beat up, barely able to keep N’dou off him. When that final bell rang, there was applause to what turned out to be an incredibly fun fight to watch. If I were to score this, I would give the fight to N’dou 115-113, but it could have gone either way by those scores. However, two of the judges had a different mindset than I did. A reasonable score of 115-113 for Mitchell was reasonable, but 117-112 and 118-110 for Mitchell was not. It was a shame a fight like this was tainted by bad judging. Nonetheless, Mitchell walked away as the interim IBF Super Lightweight Champion.

For Lovemore N’dou, his stock as a fighter went up and developed a reputation for being a tough night for top competition. As mentioned earlier in the article, he would eventually capture a piece of the 140 titles but would never be able to get that marquee win over a marquee fighter. The rematch with Paulie Malignaggi, who he lost the belt to in the first fight, would be the closest and widely seen as robbery. He continued to have mixed success retiring in 2012. In his retirement, he became a lawyer and opened his own practice in Australia. A man who clearly thought about life after boxing. For Mitchell, the win got him his long awaited rematch with Kostya Tszyu. Weight drained; Mitchell would be bludgeoned into a third round TKO defeat after being dropped four times. This would be his last fight at 140. He would move into Welterweight where he would go 2-2 before retiring in 2006. A Best I’ve Faced article from Ring Magazine on him gives an update of what Mitchell is doing today.  He works as a finance manager at a car dealership, does personal training, and owns a couple of establishments such as a lounge and a smoothie shop. Another fighter who also thought about life after boxing. It’s great that both men are leading quality productive lives in their retirement. Hopefully with more time, they will see a boxing spotlight just one more time. Their fight is an unquestionable full recommendation to watch