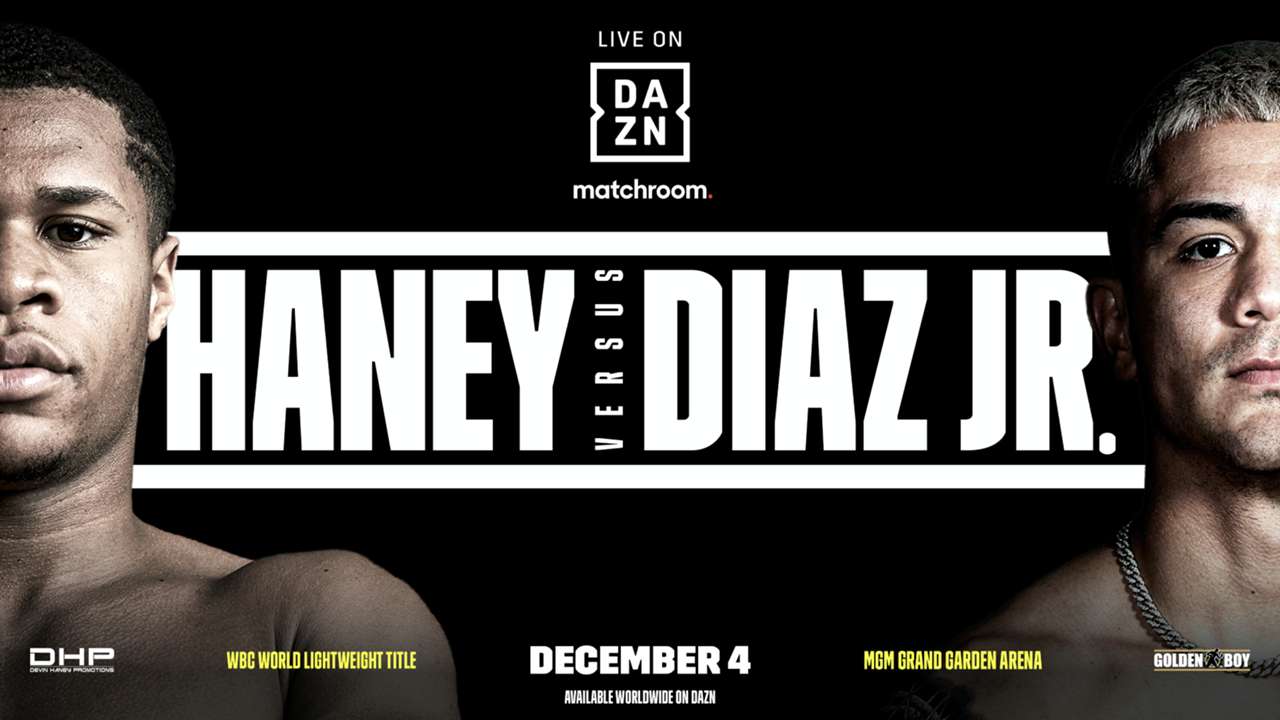 It’s always been a dream to cover a fight in Las Vegas and be able to watch a fight in Las Vegas.  I was able to kill 2 birds with one stone.  In the house at MGM Grand Arena for the Devin Haney vs Joseph “JoJo” Diaz fight.  As most people know the lightweight division was turned on its ear last week when the lineal, unified lightweight champion and arguable p4p top 5 Teofimo Lopez was upset by IBF mandatory George Kambosos Jr in NYC.  Kambosos had expressed vehemently that he would like his maiden title defense to be in Australia.  He was also interested in fighting Devin Haney to settle the undisputed argument that has been raging since September of 2020.   This subsequently increased the stakes for the main event.

Getting there early I was able to catch the beginning of the YouTube portion where the opening fight was Ricardo “El Nino” Sandoval vs Carlos Buitrago.  In a back and forth but one-sided scrap, “El Nino” scored the 7th round TKO when the ref determined that Buitrago was starting to take too much punishment. Second fight was Amari Jones vs Timothy Lee.  A beautiful counter uppercut from Jones scored a KD in round 1.  Amari had quite the reaction coming out.  His cheering section was extremely loud during the whole fight.  By round 5 it looks like Jones had beaten the fight out of Lee and was extremely close in stopping him. Lee got out of that round but could not survive round 6.  With 20 seconds to go, Lee was taking a battering forcing the ref to stop the fight for Jones.  Third fight was Alexis Espino vs Rodolfo Gomez Jr.  Espino bloodied the nose of Gomez in round 1. Outside of that it was competitive fight.  One thing for sure both guys need better head movement. By the end of the fight, they were throwing and landing combinations with bad intentions.  I personally thought Espino pulled it out, but the judges saw it different.  2 judges saw it 76-76 with the one winning card for Gomez 77-75.  I was surprised it was a majority draw to be honest.  In the final bout of the YouTube portion, Ammo Williams scored a controversial stoppage over Quantavious Cash.  In round 2, Ammo hit with Cash with a huge shot which made Cash reach out to hold.  The ref however stopped the fight just as both fighters tumbled to the canvas.   Not even a count or a chance for both fighters to get to their feet.  It felt like too quick of a stoppage.

The main card starts off with Marc Castro vs Ronaldo Solis.  It was all Castro who scored a knockdown in round 1 and closed the show in round 2 with a thunderous right hand that had Solis slowly slide down the ropes.  The ref wisely waved that fight off.  Up next was Filip Hrgovic vs. Emir Ahmatovic.  Hrgovic getting hit a lot of punches he could be avoiding but he dropped Ahmatovic twice in round 2. Unfortunately, Ahmatovic didn’t escape the next round.  Hrgovic cornered and let off a combination that dropped him down to one knee.  The ref waved it off.  The next fight is an undisputed title defense as Jessica McCaskill defends her belts against late replacement Kandi Wyatt.  First 2 rounds had a mean ebb and flow.  First round it was McCaskill making a fast start, 2nd round it was Wyatt battling back.  After that it was McCaskill landed the heavier blows.  Wyatt has a ridiculous chin to not drop from those shots.  The ref finally saw enough after a combination in the opening of 8th round stopping the fight for McCaskill.  The co-main of the evening is newly signed Matchroom contender Montana Love vs Carlos Diaz.  I had no idea beforehand Love blew weight by 4 lbs.  Well, the extra weight seems to give Love a little bit more pop in his punches. Diaz would be down 3 times in the second round.  3rd round would be the end as the ref thought Diaz was taking too much punishment and stopped it.

The main event had the arena on edge.  JoJo Diaz came into an insane reaction while Devin got booed out of the building.  That was incredibly wild seeing as Haney was the hometown fighter.  So, a motive for chip on the shoulder was already established. The early rounds see Haney being surgical with his shots while JoJo not offering much of resistance.  Any big swing by JoJo got a loud reaction from the crowd.  Both then started to invest in body work with the only noticeable sign was the fact that Haney’s mouth was wide open.  Diaz in round 4 has a real interest in making this into a dogfight.  He slammed him to the canvas and came alive by landing sharp punches to the body and head. Mid rounds were or more less controlled by JoJo Diaz who was able to land his overhand punches for Haney’s shoulder roll defense and picking off Haney’s punches with a tight high guard.   In round 9, they got a two-way warning from referee Russell Mora to keep it clean.  It was kind of a momentum killer when Haney was landing lead right hands on Diaz. Diaz took advantage afterwards to land right hooks to the body and head.   One can imagine how much more both men can take from each other.  Don’t get me wrong It’s a very competitive fight.  You can feel the fight is far from over.  I just couldn’t get over how shaky I thought Haney looked at times.  In round 12, Diaz made a final stand, but Haney showed the absolute dog in him.  He matched Diaz in output coupled with his superior hand speed until the final bell.  It was an extraordinary fight with the judges scoring it 117-111 x2 and 116-112 for Devin Haney.  The lightweight division is on fire, but one thing is for sure.  All the top lightweights are vulnerable in their own ways.  Made more poignant during the media scrum afterwards in which Devin Haney mentioned he doesn’t have too many fights left at 135.  I couldn’t agree more as I think him trying to cut down to keep his belt is slowly starting to physically affect him.  Hopefully an undisputed fight for all the belts happens sooner rather than later.