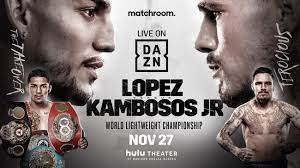 It’s great to be back at The World’s Most Famous Arena. Love going here to watch fights, and it’s even better to come here to cover a fight. Tonight, The Hulu Theatre is hosting the long-awaited return of WBA/IBF/WBO Lightweight Champion Teofimo Lopez, as he (finally) defends his belts against his mandatory challenger George Kambosos Jr. I came in lowkey hoping for a fire fight to make up for long wait. Man, oh man, was I shocked at the outcome.

Got there early so I was able to catch all the fights, including the non-televised portion. First fight was the pro debut of Anthony Herrera as he took on Jonathan Tejada (also debuting). Fight lasted 2 rounds, but it was fun while it lasted. Both guys were throwing punches. Questionable stoppage in my eyes, but Herrera looked good.  Christina Cruz vs Marygueen Vellinga. Cruz looked sharp, had fast hands, and good pop. Easy win (60-54 x2, 59-55).  After that was Ramla Ali vs Isela Vera. I was very impressed with Ali. Looked very sharp and had a nice jab. She has some real skills, Vera had nothing for her. Ali won by an easy UD (40-36 on all cards). I look forward to seeing her fight in the future.

Afterwards the televised portion of the card started, and the seats were starting to fill up. First fight on the main card was Zhilei Zhang vs Craig Lewis. Zhang looked very poor in his last fight out against Jerry Forrest, which ended in a majority draw. So, I was curious to see how he would look this time around. Zhang looked much sharper against Lewis, hurting him multiple times. Had him dancing and got him out early. Much better performance, but there’s still a ton of room for improvement for Zhang. He’s not nearly ready for any of the better competition at Heavyweight. Despite having a size advantage, he’ll get hurt if he steps up at this time.

Next fight was young Raymond Ford taking on Felix Caraballo. It was a good scrap. Ford was pushed against the ropes and Caraballo hit him with a couple shots (not all landed). The Puerto Rican crowd was cheering loud for every punch he lands (or didn’t land). Ford landed the harder punches though, albeit sloppy at times. Ford has a nasty habit of going back to the ropes, and he ends up getting caught every time. He needs to stop that because it won’t serve him well as he steps ups in competition. He was able to get the late stoppage (8th round TKO), as Caraballo was spent. However, there were a lot of questions unanswered. Ford is young and has a lot of potential, but he needs to work on some things going forward. Hopefully this fight will be good for his development. A lot remains to be seen.

The co main event was Azinga Fuzile vs. Kenichi Ogawa, for the Vacant IBF Super Featherweight title. Ogawa was giving Fuzile tons of trouble early. His jab was working effectively, while Fuzile was lunging in with wide hooks that are off the mark. Ogawa was the effective aggressor. Fuzile was put down in the 6th with a big shot, and he looked ready to go. Shocked he survived the round. Fuzile looked like a complete mess as the fight progressed. Beat up, cut, broken nose. Was dropped 2 more times in the 12th, effectively putting an end to any chance he had at winning the fight. Hard fight, but a clear UD win by Ogawa who is now the new IBF Champion at 130 (115-110 2x, 114-111). PS – This fight was what we should have gotten with Casimero vs Rigondeaux LOL.

And now, it’s time for the main event. Teofimo Lopez vs George Kambosos Jr is ready to begin. By this time, the Hulu was completely packed. Not an empty seat in the crowd. They were all rocking with Teo. Every time they should Lopez on the big screen, the crowd let off a loud roar in unison. When Kambosos was shown on screen, he received a barrage of boos. It got even louder in both cheers and boos as both fighters made their ring entrance and were introduced in the ring. But finally, the bell rings. As soon as it rang, Teo comes out swinging. Looking to end the fight early but is very wild in his approach. Kambosos hits Lopez with a counter right towards the end of the round and drops him for his troubles. Crowd turned shocked. And it only got worse. Kambosos was setting Teo up with counters and circling in and out before Lopez had time to plant his feet and hit him with his right hand. He took Lopez’s shots well when they did land. Teo was clearly frustrated and getting boxed up. It’s like he had no gameplan at all. Wasn’t setting anything up, just aggressively trying to land a hard punch to get Kambosos out of there (to no avail). Teo was however able to put together some shots at the end of the 8th to trouble Kambosos. Then starting in the 9th, the tide started turning with Teo putting together offense to trouble Kambosos. Then in the 10th… BOOM!!! Down goes Kambosos! He was hurt bad and on wobbly legs, but still managed to survive as Teo punched himself out. It became a war of attrition, with Lopez’s face all messed up. Kambosos rebounds in the 11th and does well in the 12th. When the bell rang, everybody stood up and cheered. We had a Fight of The Year on our hands here, something very few people expected.

It’s time to go to the scorecards, and there’s a long wait. Me being the boxing fan that I am, knows some controversy is brewing. I’m sitting here waiting for the cards to be read when it was announced there was a split decision. Everyone let out a big “oooooh”. First scorecard was 115-111 in favor of Kambosos. 2nd scorecard was 114-113 in favor of Lopez. 3rd and final scorecard were 115-112 to the winner… still undefeated… AND THE NEW!!! George Kambosos was awarded the split decision and is now the Unified WBA/IBF/WBO Lightweight champion. Crowd booed like crazy at the decision even though the right man in my opinion. The funny part was that when David Diamante said “and still undefeated” the crowd cheered loudly because they thought Teofimo won. Either they didn’t know/forgot Kambosos was also undefeated, or they just heard the “and still” part LOL. Either way, I felt the right man won. I personally had it 115-112 for Kambosos. Afterwards Kambosos gave a good account of himself outside of the ring, taking a shot at the “4 Kings” label the media has been pushing for the Lightweight division, and calling himself “The Emperor” of 135. The crowd cheered and laughed when he said that. Teofimo in turn, went on a rant about how he really won the fight and that he won 10 rounds. The crowd showered him with boos.

All in all, it was a great event that ended with arguably the best fight of 2021. The Lightweight division was turned upside down. We’ll see how things shake up in 2022.