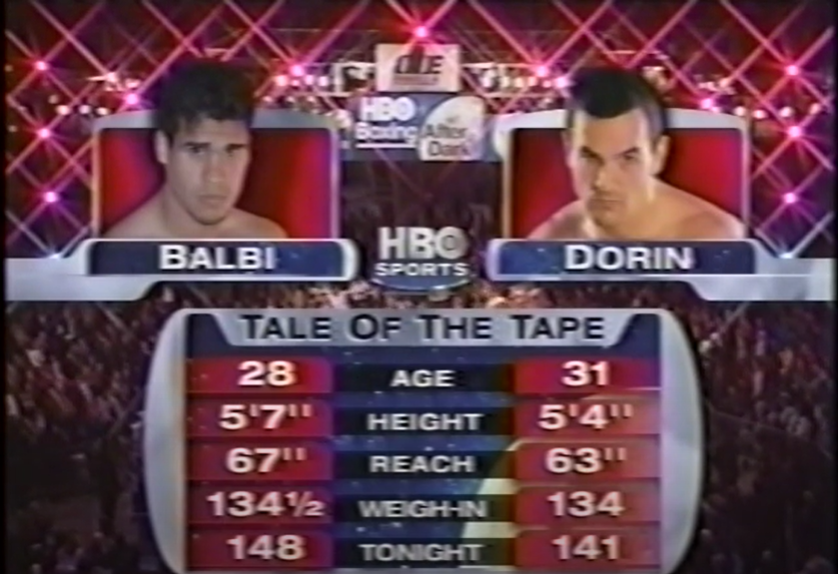 In the first decade of the new millennium, the lightweight division never lacked for any star power or talent.  You had your Floyd Mayweather, the late Diego Corrales, Joel Casamayor, Juan Diaz, Nate Campbell, Paul Spadafora, etc., etc.  There was another fighter who was also making some waves in the lightweight division.  He went by the name of Leonard Doroftei, or professionally known as Leonard Dorin.  An amateur standout from Romania, he would win bronze medals in the 1992 and 1996 Olympics.  Turning professional in 1998, he would get up to 19-0 prior to this first world title shot against Raul Balbi.  Balbi, who is from Argentina, managed to become a world champion in his 2nd title shot.  He defeated then champion Julien Lorcy by majority decision, scoring a knockdown in the process.  Leonard Dorin would be his first title defense as champion.  The location – San Antonio, TX – live on HBO on January 5, 1992.

I know it is cliché to say they tore into each other from the opening bell.  But that is exactly what they did when that bell ring.  It was instant phone booth status as both fights found their range immediately.  They bounced off short hard punches off each other with Dorin being the aggressor.  Balbi was the first to land clean effective body punches.  The body punching would also become a recurring theme in this bout.  The next couple of rounds, Balbi shifted from first to second gear and started doling out an impressive amount of punishment on Dorin.  His left hooks snapping Dorin’s head back.  His body shots making Dorin visibly freeze in his tracks.  An uppercut opening a cut over Dorin’s eye.  Dorin did his best in those rounds to fire back and rally but it was not enough for him to take the round in my opinion. The 4th round, it was Dorin who managed to temporarily hurt Balbi with a left hook following a flurry of punches.  However, Balbi was able to recover and inflict some cuts on Dorin’s face.  The original cut over the eye was getting bigger, the other cut was compounded with some swelling.  Dorin’s eyes were a mess.  There was a threat of the fight being stopped because of it.  Dorin’s cut man was the real MVP for the work he did to keep Dorin in the fight.  After getting the OK from the doctor to continue, the fight slowed to a different pace.  A lot of offense from both fighters mixed in with clinches.  Balbi landing quick combinations while Dorin would land the more telling right hands.

The 6th and 7th rounds would only get worse for the cuts that were inflicted on Dorin earlier.  At times it seemed like Dorin was throwing not really to land but to keep his hands busy enough so the fight would not be called.  The fighters were also having trouble keeping their footing due to the logo on the ring.  Balbi was relatively unscathed in comparison to Dorin.  He then decided to switch up and go to the body in round 8.  Savage hooks ripped the sides of Dorin.  It was enough to make you cringe.  Round 9 though Dorin’s determination to keep moving forward bore fruit.  A lead right hand followed up by a hook had Balbi in some trouble.  A couple of more power shots found its mark as Dorin moved in for the kill.  Balbi, on shaky legs, did the only thing he could do in that situation.  He went back to work on the body to take some wind out of the sails. In round 10, Dorin flipped the script and took the wind out of Ralbi. Not by body shots but by multiple fouls.  Fouls that eventually got him a point deducted from the ref.  Balbi, visibly angered, rallied to land more vicious hooks to Dorin’s head.  The blood again flowing very freely down Dorin’s face.  Into the final 2 rounds, Dorin looked more energetic than ever.  He used this burst of energy to land several big shots on Balbi.  Balbi at first was trading as always but his punches seemed to have lost some steam.  He then got on his bicycle to avoid getting clipped with any more shots.  Both men did punctuate the end of the fight by engaging in fisticuffs with a “devil may care” attitude when the final 10 seconds hit.

It was a bloody and extraordinary action fight.  The funny thing is that I thought Balbi did more than enough to retain his belt.  The official judges that night disagreed with my notion.  I should say 2 of the judges disagreed with my notion.  One judge scored it for Balbi 115-112. The other judges scored the fight for Dorin with scores of 115-112 and 114-113.  A split decision win for the new WBA Lightweight champion of the world.  I will say this Dorin could have also easily lost this fight by TKO with the bad cuts he suffered.  So, with that and unsatisfaction from the boxing world regarding the scores and winner, a rematch was all but inevitable.  The rematch was a far more decisive win for Dorin who repeated via 12 round unanimous decision.  Raul Balbi would only challenge for a world title once more.  He would face Souleymane M’baye for the vacant WBA super lightweight title in 2006 losing by 4th round TKO.   He would go 1-3-1 in his final 5 fights after and retire in 2010.  For Leonard Dorin, he would move into a more high-profile unification fight with then IBF Lightweight champion Paul Spadafora.  An awesome fight that ended in a split decision draw.  Just as sudden as Dorin rose to prominence, he fell just as fast.  He would have issues making the 135 lb. limit.  He would lose his belt on the scales before a scheduled bout with Miguel Callist.  A fight that would be cancelled due to Dorin weighing almost 5 pounds over the limit.  A temporary retirement followed by a non-descript comeback fight put Dorin in the win column for the final time.  This led to another high-profile fight in the summer of 2004 against the legendary Arturo Gatti.  Gatti at the time was the reigning WBC super lightweight champion.  There was a lot of excitement and anticipation for 2 of boxing’s blood and guts warriors to fight.  The fight would end up being anti-climactic as Gatti put Dorin away in only 2 rounds from a vicious body shot.  Dorin would shortly retire from boxing for good.  Personally, I thought Dorin called it a career too early and was disappointed he did not continue.  Both men have been quiet in their retirements, but nothing will ever take away from their classic first fight.  Full recommendation to watch.