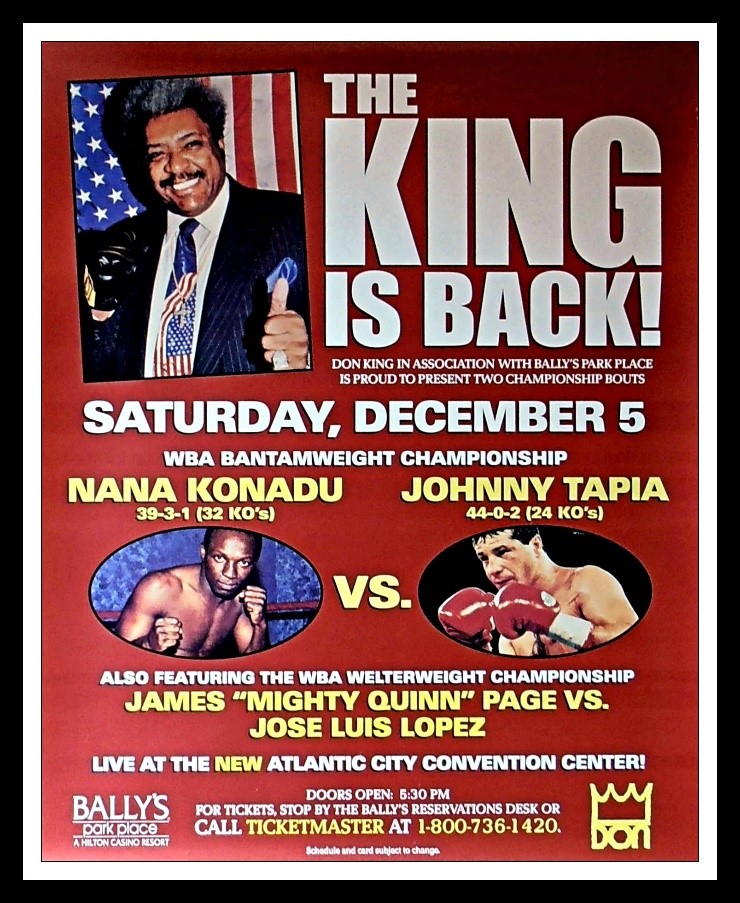 One of the reasons I like doing these articles is not only to bring attention to fights that may have been overlooked, but the fighters as well.  Boxing for the most part has a “what have you done for me lately” attitude.  Many a good fighter has slipped the mind of boxing fans both new and old.  In the time of pandemic, boxing fans should use resources necessary to educate themselves.  But let me get off my boxing high horse and get into the forgotten fade I wanted to write about.   The welterweight division in the mid to late 90s so the likes of De La Hoya, Trinidad, Whitaker, & Quartey do battles within their quartet and outside of it.  The division was on fire.  However, as all 4 would leave the division to go up in weight, new welterweights would seek to make their mark and eventually become champion.  One such welterweight was James “Mighty Quinn” Page. A troubled but talented fighter, he would go to prison in the mid-90s following a theft from the gym he worked out at. Once out, he would resume his career and sign to Don King.  He would claim the WBA Welterweight Title, vacated by Ike Quartey, in 1998 with a savage highlight reel 2nd round knockout over Andrey Pestryaev.

Jose Luis Lopez was another talented welterweight of the latter half of 90s.  An underrated boxer puncher with an outstanding ability to soak up punishment.  He would capture the WBO Welterweight Title in 1996 dethroning Eamonn Loughran in just 1 round.  He would then go on to have victories of such notable fighters such as Yory Boy Campas, Jorge Vaca, & Aaron “Superman” Davis.   These victories would lead to his most known fight to date:  a title shot against then WBA Welterweight Champion Ike Quartey.  Lopez gave “Bazooka” all that he could handle in the fight. He managed to score 2 knockdowns, but ultimately would have to settle for a Majority Draw.   The fight did nothing to lower his stock to the boxing public even as certain out of the ring habits were starting to become more prevalent.  After wins in 3 rebound fight, Lopez would get another crack at regaining a title.  He would be selected to be the opponent for James Page’s first title defense on the undercard to Johnny Tapia vs Nana Konadu.

The fight itself was a thriller.  The opening round saw Page trying to assert himself early against the ever-dangerous Lopez.  Using a jab to keep Lopez at bay in order to land a left hook.  During this, there seems to have been a cut that affected Page’s right eye.  You could see him pawing at it a little bit.  The second round followed more of the same with Page starting to open more on Lopez who seems to be hesitant to let his hands go.  In the final seconds of the round, Lopez got Page’s attention by snapping his head back with a left hand.  Round 3 saw the first knockdown of the fight occur.   Page’s hands were dropping lower than expected, a sign of things to come. A beautiful 1-2 combination from Lopez had Page unstuck and wobbling into the ropes.  Lopez would then follow up with a fuselage of punches that would send Page down into the ropes. Page got up but was in serious trouble.  Lopez would pound him around the ring but unfortunately the bell rang, saving Page from a knockout.  Round 4 saw Page sticking and moving trying to clear his head.  Lopez again though did not press to further the advantages he had caused earlier until the waning moments of the round.  He again badly hurt Page with a right hand and again let his hands go.  The bell rang and Page would even take a shot after this.  What a pattern this fight was beginning to take.  Page outworks and outboxes, then get hurts and is in all sorts of trouble.  Judges at this point must have been stressing about how to score these rounds.

The middle rounds you saw Page getting off first and landing.  Lopez just moving forward and not letting his hands go. It was ridiculous as his chin. It was amazing the punishment he was taking from Page and not going down.   Lou Duva, in the corner, being blunt that he was losing the fight and it was getting away from him. In round 9, a punch lands on Page as he is slipping.  The ref rules it a knockdown which Page jumped up and down in pure disbelief.  But it does not help where Lopez has another round he knocks Page around again near the end of the round.  As we are getting deeper into the later rounds, Lopez’s work rate started increasing slightly but his pressure was getting to Page.  Page was noticeably starting to slow down by this point.  Unfortunately, it was too little too late for Lopez.  While he had landed some good punches on Page, he was not able to slow Page’s movement enough.  When the final bell rang, everyone could tell Page that won (and survived) a gut check war.  The judges would officially confirm that via unanimous decision with scores of 116-111, 115-112, and 115-111.  In the post-fight interview, the most poignant thing to me that was mentioned was Page not even remembering he got knocked down in the fight.  It was one hell of a fight between both men.

The aftermath of these two would take different trajectories.  For Jose Luis Lopez, this would be the final stand as a serious contender.  After taking more than 2 years off, he would come back and bounce between 160 and 175 with wins against lower competition but little momentum following.  He would also suffer his first and only stoppage loss against Francisco Sierra in 2010.  He would eventually retire later that year.  For all intents Jose Luis Lopez has led a pretty drama free and quiet life in his retirement.  The same could not be said about James Page unfortunately.   Page would have 2 more successful title defenses before being stripped of his title in 2000 for not honoring a mandatory.  He would be out of the ring until 2001, where he would be knocked out in 7 by the late Andrew “Six Heads” Lewis in his final title shot.  Shortly after, he would be sent to prison for 10 years for committing a couple of bank robberies.  Upon his release in 2012, he attempted a boxing comeback which last all of one fight.  A disastrous 2 round knockout at the hands of the journeyman fighter Rahman Mustafa Yusubov who had a losing record.  With no other skills or prospects, he would return to committing bank robberies for which he would send back to jail for 7 years.  A sad post career story that is unfortunately more common than not for retired boxers.  Regardless, it does not take away from what both fighters did in the ring and their fight.  Full recommendation to watch.