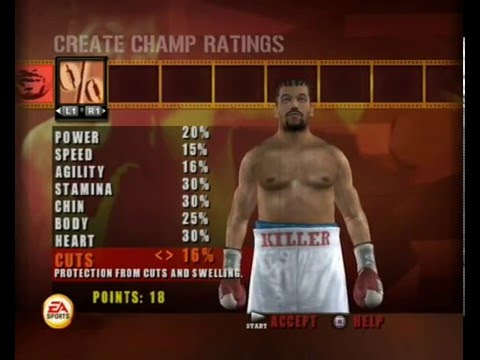 Let’s take a little trip down memory lane.  Its 2011 and you’re a hardcore boxing fan probably still in your twenties.  It’s the weekend and boxing After Dark on HBO just ended.  The fights weren’t great, but they weren’t bad either.  You don’t have to work the next day, so you don’t have to go to bed any time soon.  These are simpler times my friend.  Boxing is over, but that blood lust for compelling fights is still nagging at you.  Before you know it, you’re turning on your PS3 or Xbox gaming console.

If you were a boxing fan during this era that indulged in video games, you knew there was only one game that could quench your thirst for more boxing.  This masterpiece was Fight Night Champion, the last great boxing video game to exist in the free world.  It goes without saying that this game is already in your system so once it’s fired up you proceed to get that boxing monkey off your back.  You start out playing a few bullshit random matches before finally loading up the highly coveted career mode.  Career Mode was everyone’s little pet project in Fight Night Champion.  You created your boxer and controlled his attributes, training, and career trajectory.

Now you’ve had steady progression with your created boxer’s career and see that a title shot is only a few fights away.  You’re faced with a few options.  You can take the slightly more challenging step-up fight that would prepare you for the champion or you can take the same type of fight that’s gotten you to this position.  You won’t improve your stats much, but the odds are in your favor and another win won’t hurt. It’s getting late and you’re starting to get a little sleepy, but you don’t want to shut the game off just yet.  With that in mind, you don’t want the stress of having a tough fight now, so you go for the easy match up.

You start out dominating the infamous “Jobber Magee”, but for some reason you can’t put him away like all the others in the past.  He weathers the early storm and manages to land a punch that causes a bad cut on your eye. The blood seems to reinvigorate your opponent and he begins to increase the pressure.  Now you’re thinking to yourself that you should have just taken the tougher fight if it was going to be this much trouble.  Your early onslaught has your stamina looking funny in the light and before you know it, Jobber Magee lands a heavy shot that sits you down on the canvas.  You try to get up, but its no use.  Your head is cloudy, and you have noodle legs.  The ref counts you out and the rest is history.  You’re the latest victim of the Career Mode Glitch.

Fast forward to the present and you’ll see art imitate life more often than it should.  Boxers allow themselves to spoil on the vine, by facing sub par competition as soon as they’re on the verge of being world class.  Challenging character-building fights are scoffed at an ignored for easier opposition.  To be fair, not every boxer operates this way, but its certainly becoming the majority.  Super fights die on the negotiation table and potential meaningful fights fall to the wayside due to cannon fodder fighting above their level causing upsets.  As a boxer you should always want to improve and take fights that can add to your foundation or legacy.  Hoping to get rewarded while on the path of least resistance can come back to haunt you.  There are no shortcuts in boxing and sitting on your lead whether in a fight or in the rankings can be detrimental to the result you seek.

Unlike Fight Night Champion, real life boxing has certain consequences.  You can get injured or seriously hurt.  Certain performances will catapult you to the top of the world while some will make you plummet to the nether realm of boxing social media.  It’s better to face these boxing challenges with pride and determination than to prolong the inevitable hoping to build your confidence with inferior opponents.  Cherry picking competition and fighting infrequently are a recipe for disaster.  These career journeymen know what’s at stake and one good performance on a night where you have a bad performance can be the difference in propelling or stagnating your career.  Father Time is undefeated, but the Career Mode Glitch will always be the biggest risk a boxer takes before Father Time get a chance to lace up his gloves.  Proceed wisely.