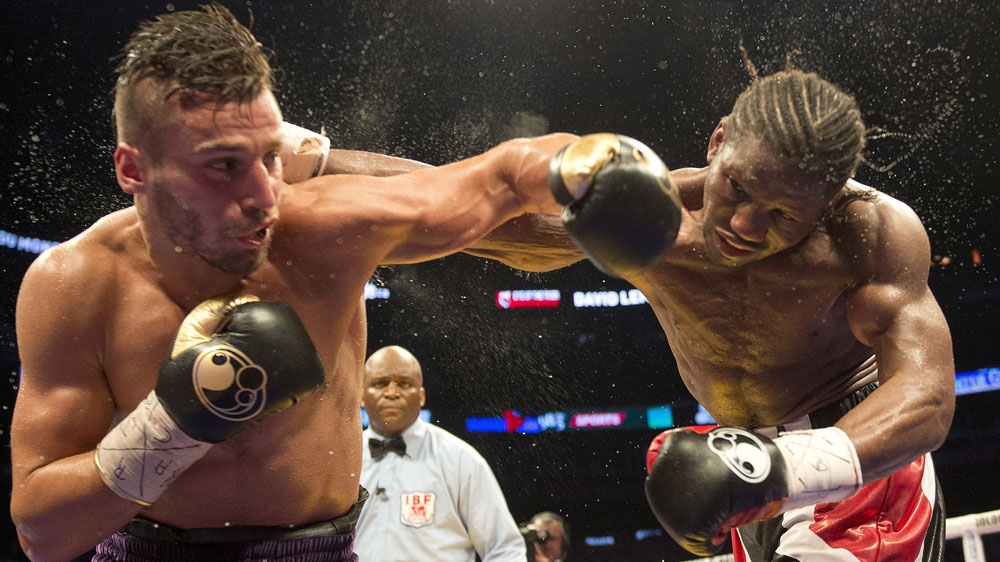 This fight was one of many that happened on that particular day.  PBC had a lackluster card headlined by a disappointing Shawn Porter vs Adrien Broner fight.  Andre Ward would come back after a long hiatus and beat Paul Smith in a fight that really didn’t register any real impact on the excitement meter.  This fight didn’t have any high expectations either.  HBO refused to even air this fight on their network.  From where I am located, it ended up airing on FOX Sports 2.  FOX Sports 2 at the time was not even offered in HD on my cable system so I had to watch it in SD.  The fight I am talking about is David Lemieux vs Hassan N’dam N’Jikam.

This fight would be contested for the vacant IBF Middleweight title previously held by Jermain Taylor who was stripped due to out of ring issues.  For Lemieux, this would be an opportunity to validate the potential he had shown at various points in his career.  He had to work his way back from reputation damaging back to back defeats to Marco Antonio Rubio and Joachim Alcine.  For Hassan N’dam, this would be an opportunity for him to regain a piece of the Middleweight title.  He had a brief reign as WBO Middleweight Champion almost 3 years prior.  He was an interim champion that was upgraded to full champion when previous champ Dmitry Pirog retired due to back issues.  He would lose it in a firefight of a first title defense against Peter Quillin in which he would go down 6 times.  He received this title shot by beating Curtis Stevens in an IBF middleweight title eliminator over 12 rounds.  The stage was now set.

To sum up the fight, it could easily be compared to the aforementioned N’dam fight with Peter Quillin.  It was a shootout from the opening bell.  No feeling out necessary, no warm up needed.  Lemieux would strike first in the 2nd round by uncorking a beautiful left hook to drop N’dam for the first knockdown.  N’dam got up quickly, shook it off like it was nothing, and went back to work.  One thing I thought is N’dam is shaking off these punches like it was nothing and Lemieux can crack.  None more apparent than in round 5 where Lemieux’s left hook would drop him 2 more times.  If there was a point in the fight where I thought the ref would take a hard look at N’dam, it would be in that round, but N’dam’s recovery powers were nothing short of amazing.  One more knockdown by Lemieux in the 7th round, a round where N’dam was boxing Lemieux’s head off.  But for the rest of the fight, especially in the championship rounds, N’dam remained upright and to me out boxed Lemieux soundly.  I was impressed though that Lemieux’s work rate still didn’t drop off.  N’dam surprisingly to me didn’t have enough to power to really keep Lemieux at bay nor really bother him.    Unfortunately he also didn’t bank enough rounds, much less returned a KD, to overcome those 4 knockdowns suffered.   Lemieux would win a UD with scores of 115-109 x2 and 114-110 and become the new IBF Middleweight Champion.  Respect and sportsmanship were displayed all around, it was an extraordinary fight.

The newly crowned champion Lemieux certainly earned the right to face a soft touch for his first title offense.  Instead he went straight for another fellow champion, Gennadiy Golovkin, also known as GGG.  GGG held the WBA Middleweight title and was calling for a unification.  In the era where other Middleweight champions such as Felix Sturm, Sergio Martinez, Miguel Cotto, and Saul “Canelo” Alvarez found unique ways to avoid GGG, Lemieux was of a different breed.  On a HBO PPV main event, he put up an admirable effort but would be stopped in 9 rounds.  His reign as champion would be brief.   He has since continued scoring some brutal knockouts along the way.  He received a title shot against then WBO Middleweight champion Billy Joe Saunders and would get out boxed over 12 rounds.  Now it seems he will be moving into the 168 division.  I wouldn’t count out Lemieux grabbing a belt there.  For N’dam it was a minor setback.  He would go on to win his next 4 fights before facing undefeated Japanese sensation Ryota Murata for the “regular” WBA Middleweight Title. In one of the more shocking results, N’dam would win a controversial decision over Murata to regain a piece of the Middleweight title he once held.  That reign would be brief when Murata would be the first to stop him in a rematch.  N’dam is still active, even made an overture to 168 in his last fight.  It is a shame this fight was not picked up by HBO else I’m sure most people would talk about it more. Then it wouldn’t be a “Forgotten Fade” and I wouldn’t go out of my way to shed light on it.  Full recommendation to watch.