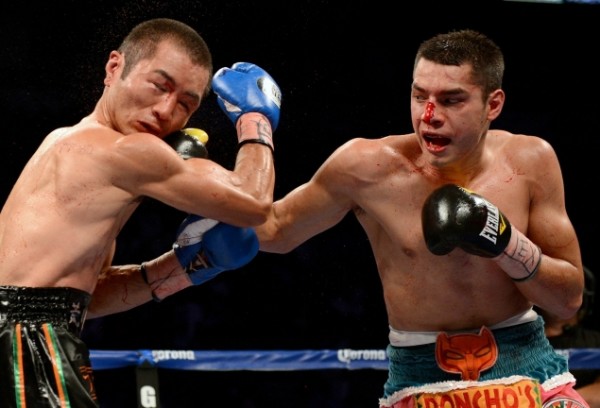 In boxing, half of the time, the best fight on the whole card is not in the main event.  In recent times you have Francisco Vargas and Takashi Miura upstaging Canelo vs Miguel; Cotto with their war.  Or the likes of Srisaket Sor Rungvisai and Chocolatito waging a battle very rarely seen in America in the lower weight classes as a co main to GGG vs Daniel Jacobs.  This particular fight I am about to talk about wasn’t even hyped up to be anything but a showcase for an up and comer.  The fight I’m referring to is Omar Figueroa vs Nihito Arakawa.

This fight was part of the “Knockout Kings 2” card put together by Golden Boy Promotions.  A card opened with Keith Thurman stop Diego Chaves in a rousing slugfest and ended in the main event where Jesus Soto Karass became the first man to KO Andre Berto.  It was the middle fight – Figueroa vs Arakawa – that stole the show.  The fight was for the interim WBC Lightweight Tile.  The interim status was because the champion, Adrien Broner, had won the WBA Welterweight title from Paulie Malignaggi and had yet to vacate it.  Omar Figueroa (21-0-1 17 KO’s) was an exciting volume puncher and an extremely hard puncher to book.  If I remember correctly with regards to his knockouts all but one at the time ended in 3 rounds or less.  Nihito Arakawa (24-2-1 16 ko’s) was not really known outside of Japan. Prior to the fight just to get an idea of what type of fighter he was, I managed to see his lone fight outside of Japan vs Daniel Estrada.  I thought that it was a hell of a fight but somebody I thought Figueroa would put away easy.  How wrong I was!!

From Round 1 to Round 12 it was a flat out war.  Omar was landing at will on Nihito for the majority of the fight and he just kept on coming.  There were 2 knockdowns of the flash variety that were scored by Omar in the 2nd and 6th rounds.  I love a good clean brutal fight as the next boxing fan but seeing Arakawa absorb this type of punishment was alarming.  His eyes were swollen as was his head.  The funny thing is I kind of expected Laurence Cole to stop the fight after the 6th round.   In a way I’m glad he did not stop it.  Not to say it was all one way.  Arakawa was throwing back but the problem with that was he was not sitting on his punches.  They were arm punches.  Numerous arm punches that also found their target more often than not.  Omar’s nose ended up broken and bloody.  What was more troubling was that Omar ended up damaging his hands from landing so many punches.  All of these injuries would set the stage for a late rounds rally by Arakawa, who moved forward on the fading Figueroa.  The conditioning that both fighters shown for this was incredible, especially for Arakawa.  It’s amazing neither men collapsed from this fight.   When the final bell ran I remember my beater being sweaty from watching this feeling relieved it was over.  It was an outstanding fight.  Now I remember not agreeing with the official scores for Figueroa (119-107, 118-108, and 118-108).  Personally I thought it was around 115-111, however Figueroa was no doubt the winner of the fight.  Arakawa, even after the beating he took, was able to give a post-fight interview ending it with a “Thank you very much Texas San Antonio.”

The aftermath of this fight I honestly thought this fight would have ruined both fighters.  Bradley vs Provodnikov was the leading candidate for fight of the year for 2013 and this was the first fight to really challenge it. Even Tim Bradley remarked that his fight with Provodnikov was kid stuff compared to that.  The compubox stats were eye popping.  Omar landed 480 out of 942 punches; Nihito landed 280 out of 1170 punches.  No slouching on the work rate whatsoever.  Nihito Arakawa is still fighting as of 2019.  After Figueroa, he was given a shot on the Canelo vs Angulo PPV card against Jorge Linares.  Linares easily out boxed him to a wide decision loss. After which he returned to Japan, where he has been operating since. He is ranked 7 on the WBO 135 rankings so we may see one more high profile fight from him in the near future.  As for Omar, he never really regained his momentum as he has had to battle chronic hand issues, inactivity, and weight/ discipline issues.  He has maintained his zero since that fight and had a very good win over a faded Robert Guerrero. But spotty performances sprinkled in with had close calls against the likes of Ricky Burns and Jerry Belmontes.   Nonetheless it doesn’t take away from the unheralded classic that is Figueroa vs Arakawa.  As always, do not take my word for it, watch for yourself.