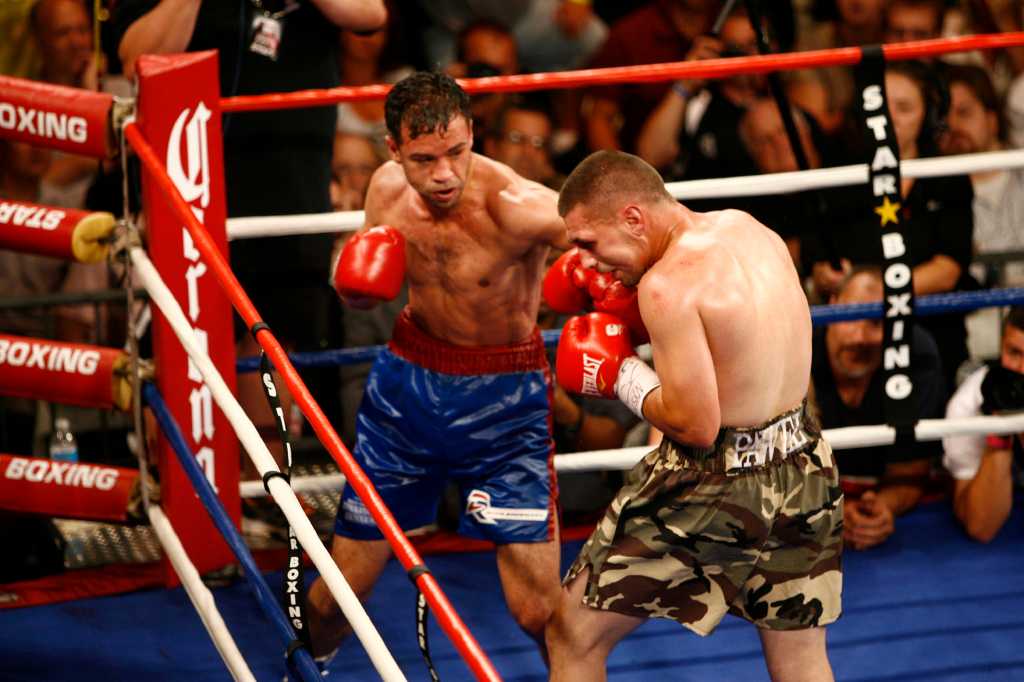 In my previous “Forgotten Fades” articles, a lot of fights mentioned were originally aired on ESPN.  Well here’s another gem of a fight that comes from that network – Delvin Rodriguez vs Pawel Wolak 1.  You are probably asking when seeing this choice “Why no mention of the second fight?”  I will touch upon that later in the article.  Delvin Rodriguez (then 25-5-2 with 14 KO’s) was a staple on the ESPN Friday Night Fight cards and had plenty of fan friendly fights on there. Oscar Diaz, Jesse Feliciano, Allen Conyers, Shamone Alvarez were some of those affairs.  He would also have a couple of USBA Welterweight title reigns during that period.  He would be making his 154 debut.  Pawel Wolak (then 29-1 with 19 KO’s) was an exciting prospect in the 154 division at the time.  His only professional blemish was getting outboxed and knocked down by the underrated Ishe Smith.  He would rebound after that to score the biggest win of his career by stopping former WBA 154 champion Yuri Foreman in 6 rounds.  That fight got plenty of attention because it was on the PPV undercard of Miguel Cotto-Ricardo Mayorga. The matchmaker who ended up putting this fight together for FNF couldn’t imagine how it would it turn out.

Similar to his performance in the Foreman fight, Wolak wasted no time bringing the fight to Rodriguez from opening bell.  Putting Rodriguez under pressure by staying in his chest and bullying him in his attempt to wear him down.  Rodriguez was getting hit constantly with body punches and hooks upstairs. This was the pattern for most of the earlier rounds but Rodriguez would not let that be the story of the whole fight.  Every time he was able to create some distance, Rodriguez would punish Wolak with some serious combinations.  He also start timing Wolak’s attempts as he came in with right hands and uppercuts that were noticeably snapping his head back.

As the fight progressed into the middle rounds, Wolak’s right eye swelled up grotesquely.  It was at the level if not worse than the swelling Hasim Rahman got from Evander Holyfield.   During times of the fight, the ref Steve Smoger would call a break in the action to have the doctors check it out.  To my shock and minor disbelief, they would say Wolak was good to go.  Now I’m watching this and thinking there is no way that Wolak is seeing anything out of that eye.  The fight just got more and more brutal by the round.  Round 9 especially was tough to watch as Rodriguez was targeting that swelling on that eye.  I was cringing at the shots that were landing on it.  That round was also notable for Teddy Atlas going off on a rant regarding Haye vs Klitschko.  Teddy was not a fan of that fight due to what he perceived as lack of desire from both men.  He would say that if those 2 fought like Rodriguez and Wolak, then Klitschko would not be heavyweight champion. The 10th and final round, both fighters just let it all hang out to the final bell with the audience cheering wild.

Personally I thought Rodriguez edge it out by a couple rounds due to his work in the later rounds.  The judges saw it a little differently.  One judge scored it 97-93 for Rodriguez. The other 2 judges scored 95-95 which made the fight a majority draw. Both Wolak and Rodriguez were nothing but class and cordial to each other in the post-fight interview with the ESPN FNF crew.  Teddy again reiterating his views on Haye vs Klitschko and how that fight was nothing in comparison to this fight.   It was a definite fight of the year candidate.  It would get the Boxing Writers Association of America Fight of the Year award for 2011.   Both were adamant on doing it again.  Which leads up to the second fight.  Sometimes you have the first fight that is so good but underrated that it is warranted its “Forgotten Fade” status.  Sometimes you have subsequent rematches that you just like to forget about it period.  Wolak vs Rodriguez 2 is one of those fights.  The rematch took place on the undercard for Miguel Cotto vs Antonio Margarito 2. This time the fight was largely a one sided affair won by Rodriguez who nearly came close to scoring a knockout in the final round.  Wolak would retire from professional boxing shortly after this fight.  A brief sliver of potential that never got realized.  Rodriguez would soldier on but never really being able to get over the hump.  He would only win 3 of the next 8 fights afterwards.  He would fall short in title shots against then 154 champions Austin Trout and Erislandy Lara.  However they will they will always have that fight.  Full recommendation to watch.