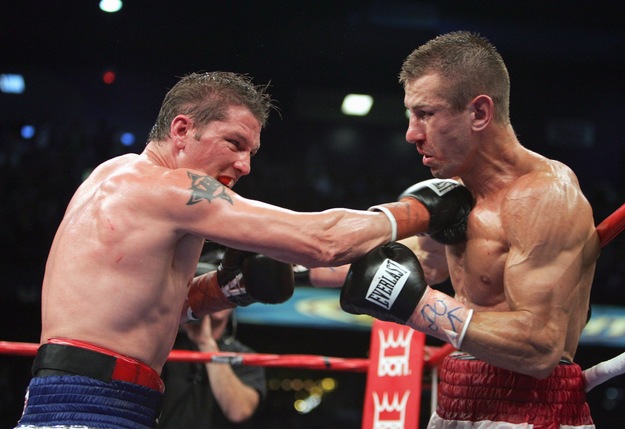 Light heavyweight has always been a division to watch.  It’s been a division very consistent with notable fighters mixing it up during different eras. While names Jones, Calzaghe, Hopkins, Tarver were the headliners, there was a second wave bubbling underneath the surface.  Specifically, these two upcoming fighters in Tomasz Adamek and Paul Briggs.  Antonio Tarver getting stripped of the WBC Light Heavyweight Title paved the way for these 2 to be matched up with the vacant title.  The result is some of the bloodiest pair of fights to ever take place not only in the division but boxing itself.

The first fight, which took place on 5/21/2005, was the co main to Lamon Brewster vs Andrew Golota.  It took no time to get going.  From the opening bell, those 2 wasted no time in throwing right hands,  By the end of the opening round, a bad cut from the left side of the eye of Paul Briggs courtesy of headbutt momentarily threatened the fight.   This would only make Briggs fight even harder.  He manages to badly hurt Adamek in the beginning of the third round.  Adamek’s legs were all over the place as Briggs poured it on.  By the end of the round Adamek’s eye was neatly swollen and shut.  To add on to the maladies, Briggs also severely breaking Adamek’s nose in the exchanges.  Adamek  came on in the middle rounds with a savage body attack trying to slow down Briggs’s momentum.  In round 8, Briggs would buckle the legs of Adamek with brutal right hands.  Badly hurt, this would be the closest I’ve seen Adamek being stopped.  His face, a pained, swollen, bloody look.  The level of punch resistance shown by both fighters is incredible.  As the fight went into the championship rounds, Adamek is out-boxing Briggs as the earlier body attack took its toll.  Briggs was still game but his punches lacked  the firepower it once had.  The announcer screaming loudly that Briggs would need a knockdown to rescue himself in this fight.  The knockdown never came as the final bell rang.  The canvas a blood stained masterpiece from the pugilistic genius of these 2 fighters.  Tomasz Adamek would win the fight and the vacant WBC Light Heavyweight Title by a majority decision with scores of 117-113, 115-113, and 114-114.  It was a simply awesome fight.

The second fight would actually up the ante.  A rematch on the co main of Nikolay Valuev vs Monte Barrett heavyweight championship fight.  Round 1 or Round 13 if you want to call it that.  No time was wasted as both came out guns blazing.  The opening round would see Adamek go down for the first time in his career courtesy of a well timed left hook from Briggs.  Just like in the first fight, a cut was opened over the eye of Briggs by Adamek.  Briggs with increasing regularity was hitting Adamek with clean right hands. Adamek’s nose was busted up once again.  It looks like Briggs was going to turn the corner and even up the fight count. In round 8, it was Adamek’s turn to hurt Briggs badly with a right hand as they slugged it out.  Adamek pulling a veteran move by landing a mean left hand low on Briggs who fell to the canvas in absolute pain. The ref would give Briggs ample time and also dock Adamek a point for it.  A seemingly close fight has now got even closer on the cards.  The next 2 rounds Adamek  caught a beating from Briggs and was bleeding heavily from his eye, nose, and mouth.  In the final round, Adamek made a final bloody stand and seemingly gets the better of Briggs.  At the bell, Briggs looked like one more clean combination would put him on the canvas.  Briggs looked very unsteady as he stood in the corner as the judges read the scores.  Unfortunately, he would come up short in a close majority decision loss with scores of 115-111, 114-112, and 113-113.  Adamek retained his light heavyweight title in another savage, debilitating fight.

Tomasz Adamek would eventually lose his light heavyweight title to an undefeated Chad Dawson.  He would then go on to the cruiserweight division and win the title from Steve Cunningham.  Eventually making a final stop at the heavyweight division winning fights over several fringe contenders and past prime heavyweights before falling in a lone heavyweight title challenge to Vitali Klitschko.  He was last seen in the ring last 2018.  He has not announced retirement but almost 20 years in the ring over 3 divisions, one would think the end has definitely come.  Unfortunately Paul Briggs would not last too long as a pro boxer.  The 2 fights with Adamek were physically damaging affairs that he never recovered fully from.  He would only fight 2 more times a pro.   He started exhibiting some serious neurological problems and had originally retired after his final victory in 2007.  But reportedly strapped for cash he went back into the ring 3 years after.  His final fight, in 2010,  a source of controversy in which he went down in the first round from a seemingly harmless blow to the head by Danny Green.  His license was immediately revoked as his health problems became public knowledge.  The high price of boxing and poor Paul Briggs became another casualty.  But for those that saw him in the ring in those 2 wars against Tomasz Adamek, they will never forget the extraordinary effort that was shown.  A full recommendation to watch.